Do You Suffer from Glossophobia? 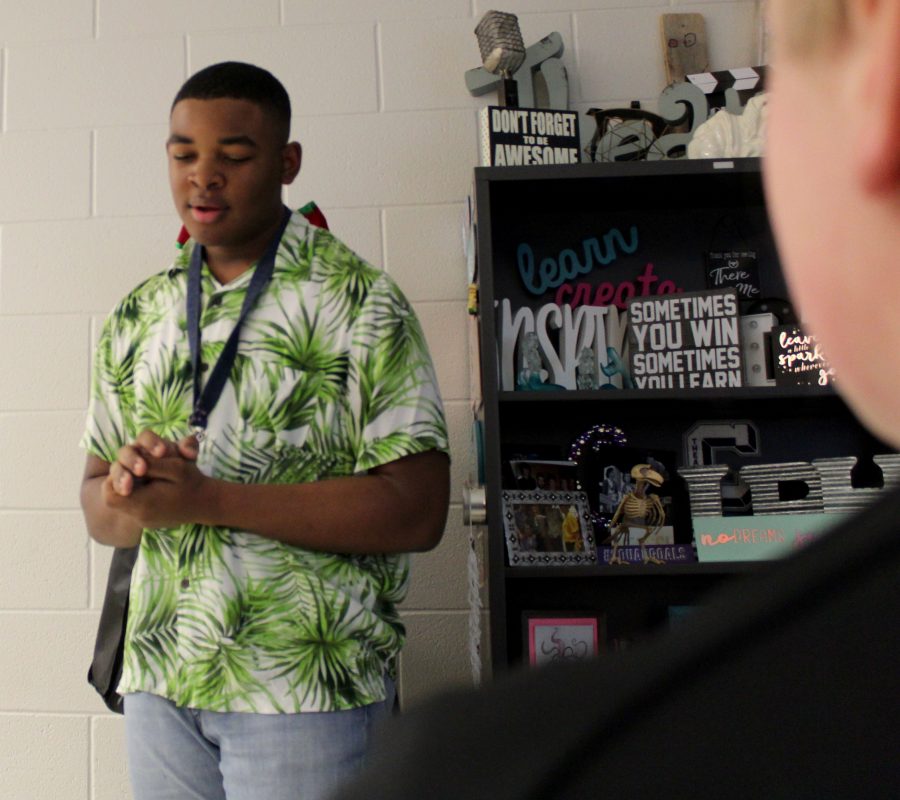 Student speaking to a class while not making eye contact. Taken by Lilly Dunn.

Gl-glossoph-phobia: The fear of public speaking.

Public speech is the art of delivering dialogue to an audience of listeners. For many people, this causes a nerve-wracking feeling throughout their body and makes them anxious. While not everyone has the natural talent or skill for this, presentations are still required in many students’ classes.

When speaking to the public, one may fear messing up and stumbling over their words. Junior, Journi McClought, is one of many students who struggle with speaking in front of her classmates, and sometimes deals the physical effects of her fear.

“I’m afraid that I’m not saying what I’m supposed to say, or I’m saying the wrong thing. I get nervous and I start to stutter. I have felt dizzy and I almost threw up, so I had to sit down. When I have to speak, I’m thinking, ‘Don’t mess up’ and, ‘I got this,’ almost like a pep talk,” said McClought.

Despite the struggle, McClought feels she needs classes that require her to speak up because her career interests revolve around basic social skills.

“I want to be a chef. If I wanted to describe my dish or I’m at a restaurant and people want to compliment the head chef, depending on the situation, public speaking could be necessary,” said McClought.

McClought understands the need to be able to communicate, so instead of opting out of classes that require public speaking, she’s plans to practice and get better at it.

“I can overcome my fear by practicing speaking to public crowds. I wouldn’t be nervous anymore and I won’t be anxious,” McClought said.

Similarly, freshman, Camille Renfroe says that when she presents, she has an uneasy feeling that people will not be able to comprehend her. She also has nervous habits she exhibits while presenting.

“I’m afraid of messing up when I talk or my message not being understood. Once, I stuttered so much that I froze and everyone was laughing. When I’m speaking, I’m usually thinking, ‘Oh no, they’re looking at me.’ I’m panicking. I cover my face completely and I dig my nails into my hands,” said Renfroe

Renfroe adds that teachers could be more considerate to those who are afraid of publicly speaking by having smaller sessions for some presentations.

“I think teachers could make small groups for speaking and let the students get used to speaking before they go to a bigger group. One teacher actually let me present my project to her after [class]. I think students are usually required to present their projects in front of the class so they can get ready for college,” said Renfroe

Because public speaking does not have a significant spot in her future, Renfroe doesn’t see how it is preparing her for anything. However, she would still like to overcome her fear.

“I don’t think it prepares you for college because there are a lot of kids in college classes and not everyone is going to have to speak. Normally, it’s like a small group of people that you’re talking to. The career I want to do in the future does not require me to speak publicly a lot. I want to do something in agriculture,” said Renfroe. “I would like to overcome this fear. It’ll get rid of my anxiety for every presentation and I’d get better grades.

Mansfield ISD requires that students take a speech class to get a high school credit. Renfroe struggled in this class, but had an easier time because she was familiar with some of her classmates.

“I had a lot of friends in [professional communications] so it was a little easier. But, I still was very nervous every time I was going to present,” said Renfroe.

“As we progress at the beginning of the school year, a lot of kids are nervous and we do different types of exercises to make them grow as communicators,” said Elolf.

When having to give a speech, rather than just attempting to do their best to speak, a number of students would prefer receiving a zero for their grade.

“Every semester some people would just rather not present. Some kids would rather take a zero than get up in front of the class and present. It may be because of their lack of confidence or lack of preparation. Some people are just afraid of what other people might think or perceive of them,” said Elolf.

According to Elolf, a way to help with the fear of public speaking is to be prepared and rehearse ahead of time.

“Practice is big and this class helps with that. Having self-confidence also helps. But, the biggest thing is being able to be prepared. A lot of times, people are unsure of themselves, so they are nervous because they’re unprepared or haven’t looked over the material. So, the more that they can practice on their own, the better they’re going to be,” said Elolf.

While it is not likely that everyone will have to speak to a plethora of professional people in one day, AP Psychology teacher, Heather Willson,  says that public speaking is inevitable and will make an appearance in most people’s future.

“I do think [public speaking] is a life skill. You always have to speak in front of people you don’t know, don’t like, or aren’t comfortable with. Job interviews are a perfect example. It’s a high stress item where you have to talk to people. [Public speaking] prepares students for real life. Do I think every student will stand in front of an audience of 10,000 people? Not at all. But I still think that at some point, they’re going to have to speak to a boss or someone they don’t know and don’t want to talk to,” said Willson.

Wilson explains that the body of someone who is extremely nervous or under stress will trigger certain chemicals in their system.

“The mind releases particular hormones that causes adrenaline and a fight or flight mode. It causes a physiological response. They start sweating, heartbeat accelerates. Basically it’s a stressor mode. If you are under high stress for a long time, these are students who actually [have] anxiety, it can cause heart issues, migraines, or sleeping problems. Most kids don’t have this, they’re just uncomfortable. Practice dissolves that,” said Willson.

For those who have glossophobia, fearing public speaking can have an effect on their future or their school grade. Many teachers believe the best way to aid this fear is by believing in yourself and being prepared. Overcoming this fear seems to range from being clinically impossible to being quickly adjusted by a confidence boost. In the end, glossophobia is a force for students and teachers to thwart alike.