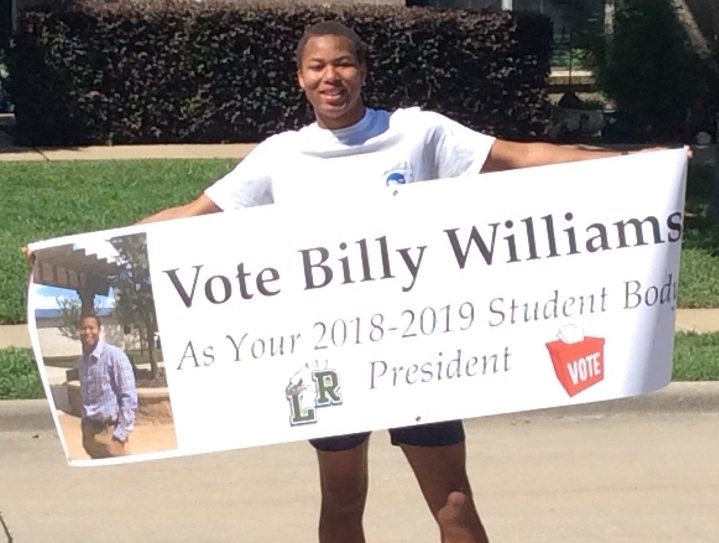 Decisions shape one’s everyday life. While some of these have short term affects, other choices can change the course of a person’s life. Outcomes are more than often unknown and this may prompt fear or worry for those who are keen on controlling their future. A relatable instance for almost all teens is making the transition from middle school to high school. The idea is either intimidating or exciting depending on the student in question. At Lake Ridge, Billy Williams posses a story of how he made his transition into this new chapter of his life that very few can relate to. The junior describes his freshman year in high school as “weird” because it began while he was still attending Danny Jones Middle School.

“I came from a school in Illinois and we were really ahead of Texas. When I got here it was futile for me to stay in the classes that were in my grade level. My parents contacted the district to ask what I can do to get ahead and they said I can take a test to get out of the classes and you had to get an 80 or above to get out. I got an 80 and above in both sections. It allowed me to skip eighth grade math and take Algebra in seventh grade and I took Geometry here at the same time I was in eighth grade,” said Williams.

High school is often said to be a place where you find yourself, get your lunch money stolen, search for a high school sweetheart, or get rejected by the mean girls. All of these exaggerated notions weighed heavily on Williams as a middle schooler. He came to find out that the students didn’t meet those negative expectations after all.

“I was scared that high school would be like TV where the big kids were actual bullies but when I got here, there were freshman and sophomores in the class and they were really nice and kind so it kind of took away that fear. I made friends by helping them with their work,” said Williams.

Despite the many perks to starting his freshman year early, there were some downsides as well. His mindset and tendencies as a middle schooler did not measure up to the mindset required for a high schooler. Taking Geometry his 8th grade year was something he wasn’t mentally prepared for.

“It hurt my GPA bad, because I wasn’t ready for that hard class. As an eighth grader I’m not thinking this is going to hurt my GPA, rank, this is going to affect how I’m going to go to college. I wasn’t thinking I have to get a high A, so with all the grades I’m getting now and the grade I got in Geometry-there’s a big gap by five or six points and you can definitely tell it hurts my GPA. I would change my habits because they were like, on Big Ideas Math, I would cut it off after I hit a 90 or 92. So I would go all the way to the 100 , study harder for a test, double check my quizzes, and make sure I was prepared for stuff,” said Williams.

While being invested in academics, the sophomore participates in many extracurriculars at Lake Ridge. Williams believes that getting into programs, such as the National Honors Society, had much to do with his realization that he needed to change his study habits and goals.

“I play Varsity Tennis, I am in student council, Math UIL, and National Honors Society. If I didn’t do Geometry in eighth grade, my grades would not be where they needed to be because it was the first hard class I ever had and it taught me that I need to work harder in order to get the things that I wanted,” Williams said.

During his freshman year, Williams was not alone in adjusting to high school. Rachel Cole, senior, is one of the students that was in Williams’s Geometry class. She also benefited from his joyous attitude. Having Williams in her class gave her encouragement all year long.

“Geometry itself is a hard class, but Billy was always upbeat and came in with a smile on his face. I had it first period so seeing him come in with a smile I was like ‘If an eighth grader can do this I can’. Taking on a high school class as an eighth grader shows a lot of initiative, so if you’re willing to put yourself in a high school environment before you need to, I do think that shows that you want to get far,” said Cole.

Work ethic is essential to Williams’s desire to get into his dream college. The profession he wants to pursue requires placement in the Political Economics major.

“Its important to work hard because I require it to get in college. I plan on going to the University of Southern California and that is one of the hardest schools in the country to get into. I want to work in the World Bank where they track transit countries and they help impoverished and third world countries and they find out how much money to lend the countries. What really helps with a degree in Political Economics is you can study how much money to give these other countries and how they’ll use the money and how they’ll benefit, but you also have to look at the politics of it and see if the leaders are going to waste it on themselves and not give it to the people,” said Williams.

Williams’s head start to high school  brought both positives and negatives. He triumphed through adversity and made friends along the way. Now he is able to be ahead in a lot of classes without making the same mistakes and will graduate early in 2019.