Which is Spreading Faster: COVID-19 or Targeted Racism? 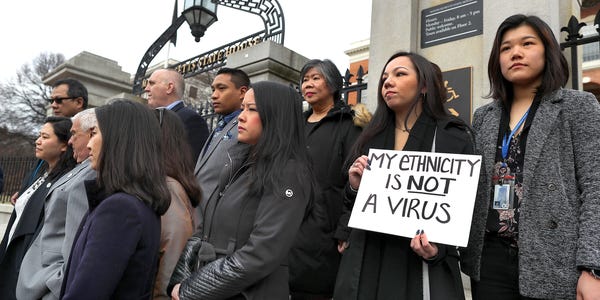 Racism targeted towards the Asian American community has increased along with the Coronavirus.

Recently, the outbreak of COVID-19 has caused widespread panic among impacted nations globally. Within American borders, the virus has created major anxieties for citizens and has led to long lines of customers beginning to panic-buy variously-deemed necessities at their local grocery stores. Viruses and illnesses do not discriminate towards their hosts based on one’s ethnicity or nationality, but the recent stigma and misinformation crowding the media certainly does pose that idea. The virus seems to have perpetuated racist ideoligies within American borders, mostly targeting Asian-American citizens.

In multiple cases, President Donald Trump has labeled the disease as the “Chinese Disease.” In a conference, when asked why he uses the term, he claimed to call it the “Chinese Disease” due to its origins. While he isn’t completely wrong, his name for the illness presents a face of ignorance to how it could impact Asian-American communities nationally and globally. Junior, Kayla Nguyen, has noticed the recent spike in racism targeted toward the Asian-American community and believes Trump’s term for the virus does not help the ongoing problem.

“The rise of racism occurs because people are looking for someone to blame. I believe this disease acts on the fear and anxiety this nation has and further maintains the level of racist ideals. When President Trump called it the ‘Chinese Disease,’ it enabled more people to blame Asian-Americans for the disease and act in, sometimes, violent manners towards them,” Nguyen said.

The virus has caused widespread fear; a fear that causes some individuals to act out in abnormally angry ways. COVID-19 is new and unknown and because of this, people look for someone to blame. Junior, Sarah Cole, believes that these hate-driven acts directed at the Asian-American community are fueled by the fear and by a desire to find someone to blame.

“This new wave is obviously about racism. It is stupid, but people think that since the virus came from China that Asian people are more likely to have it. Additionally, people blame the entire ethnicity for spreading the virus. The virus may have come from China, but that doesn’t mean the ethnicity itself is solely responsible for spreading it. In this time of fear, people need someone to blame, so they use Asians as a scapegoat,” said Cole.

Stories of hate crimes aimed at the Asian community flood the media, and while it may seem as though these crimes are far removed from one’s own community, that isn’t exactly the case. Whether it be dirty looks and judgmental stares or more violent and physical acts, outwardly expressed racism towards Asians is more prevalent in today’s world than in quite some time. Christine Vo, junior, admits that she and her family have been victims of peoples’ prejudice.

“I have noticed more people get violent towards Asian-Americans in grocery stores, not only through social media, but also within my family. My cousin couldn’t even go to the store without getting dirty looks from other shoppers. With people calling COVID-19 the ‘Chinese Disease,’  they place an unnecessary target on the Asian community. It is easier to yell at Asian-Americans that neighbor you than it is to fight a whole country,” Vo said.

The new virus isn’t the first widespread global illness that has majorly affected populations. Illnesses such as the Bubonic Plague in the 1300’s killed nearly 50 million people across Europe and the Eastern Hemisphere. During the Columbian Exchange, diseases such as Smallpox, Malaria, and Influenza widely affected Native American populations. Despite the severity of these various diseases, the European population has historically never been the aim of such racism. Cole believes this fact is the result of skin color and who controlled the narrative of history.

“Europeans are white, so they have never had to face racism as a consequence of their diseases. The diseases, such as Malaria and the Flu, that spread towards Native Americans killed entire populations, but that is completely looked over. However, the moment that a virus simply originated from a country filled with mostly non-white individuals, the world is quick to blame the entire ethnicity,” said Cole.

Coronavirus is a very scary fact that has overtaken the world. While it may seem easy to point the finger at the Asian and Asian-American community, they are not solely to blame for this virus becoming a pandemic. During this age of social distancing and self-isolation in combat against the virus, people must also combat targeted hate crimes with knowledge and understanding.