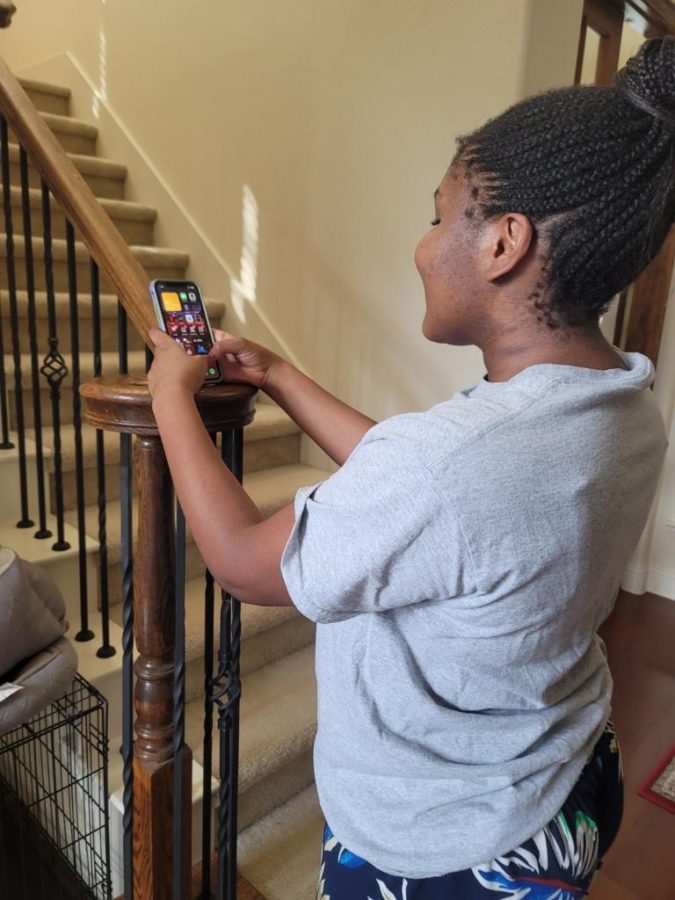 The iOS 14 update to Apple products has become the new trend on social media.

On September 16th Apple released the new iOS 14 update that offers many new features to Apple product users. Users now have the ability to customize their screens with the new widget feature, leave a FaceTime call without going on pause, continue to watch videos without being in the app, and reply to a previous message directly. Showing off personalized home screens has become especially popular among iOS 14 users; it has even become a trend on the popular app, Tik Tok, for users to show their customized home screens.

Perhaps the most noticeable change due to iOS 14 is the custom home screens of each Apple user. However, changes can also be seen in the Apple Music, FaceTime,and Messaging apps . Junior, Lexi Kern, has noticed some smaller features as she’s continued to use her iPhone since she installed the update.

“Since I got the update I’ve been seeing little changes here and there as I’ve just been using my phone normally. For example, I was using Apple Music the other day and I saw that when I held down the artist name at the top it gave me two options. I could either go to the search menu or stay in the artists’ songs. That wasn’t a big change, but it was something that I  noticed that wasn’t there before and I thought it was pretty cool,” Kern said.

One of the main changes has been in the FaceTime app. Users are now able to leave the app and continue to look at the person you are talking to, all while not being forced to put the other person on pause. Senior Jalen Harrison, enjoys the new Apple update to the app as it allows him to multitask during his FaceTime calls.

“Before the update, if I wanted to check another app or do something outside of FaceTime, I would have had to go on pause and the person I was on FaceTime with would be confused and keep asking me to get off of pause and it would just get annoying. Now, I can go into another app and continue looking at the person and having a face to face conversation, while I’m also scrolling through Instagram or texting another one of my friends or something,” Harrison says.

The update to the FaceTime app has made multitasking while on the phone with peers much more efficient, and certainly easier. Despite the many positives the new update brings,Harrison admits this new update does have some cons.

“I really like the customized home screens I see on Tik Tok, but I just don’t know how to do them, and when I ask people how to do it they all say it takes a really long time and you have to download another app in order to customize your Homescreen. that’s the only thing I don’t really like. I wish they would’ve made it easier to use.” Harrison said.

Some people appreciate the new Apple update, as it has helped them to become more organized with all their apps. Junior, Kamdon McFarland, admits that the update has caused him to reorganize his apps in a more particular way.

“Since I got the update, I’ve organized my apps by color and how often I use them, so like Instagram and Snapchat are at the front of my phone and the apps I don’t use as much are towards the back. I’ve also color coated the apps in my phone to match the widgets that I put in there so it looks more organized.”

iOS 14 has provided Apple users with many new features; one of which being Widgets. Widgets allow users to view the weather, notes, and even inspirational quotes in a larger icon. McFarland also uses his widgets to inspire himself, and keep himself on track.

“I put inspirational quotes and things that relate to football in my widgets, so I can have a constant reminder of what I’m working for,”  McFarland says.

Along with the customized Home Screen McFarland also appreciated the fact that you can reply directly to a previous text message.

“I like that you can reply to a previous message because it allows the conversation to flow better and it makes it less confusing when I mention something from an earlier conversation, McFarland said.

Many users are enjoying the new updates to their phones, but the new update is also being met by people who do not enjoy the new features. Some users who updated their Apple device are not happy with the outcome. Junior, Kailah Rathell, believes the update is somewhat overrated.

“I feel like the update was overhyped because it takes too long to add pictures to make a widget and the whole process is really confusing. I feel like in some cases the update was necessary, like I’m glad you can reply to certain messages now and get off of FaceTime and still see people’s faces, but overall I just feel like it isn’t as good as everyone is making it out to be,” Rathell said

Recently, updates Apple has made to their products have been bug fixes and more minor changes; with iOS 14, Apple made more major changes to their products.According to a June 2020 Apple article Apple claims it “reimagined the iPhone experience with iOS 14” and many users are enjoying the features it has to offer. Despite the public’s perception of the update this has been the “biggest update to ever to Home Screen pages” according to to a June 2020 Apple article.