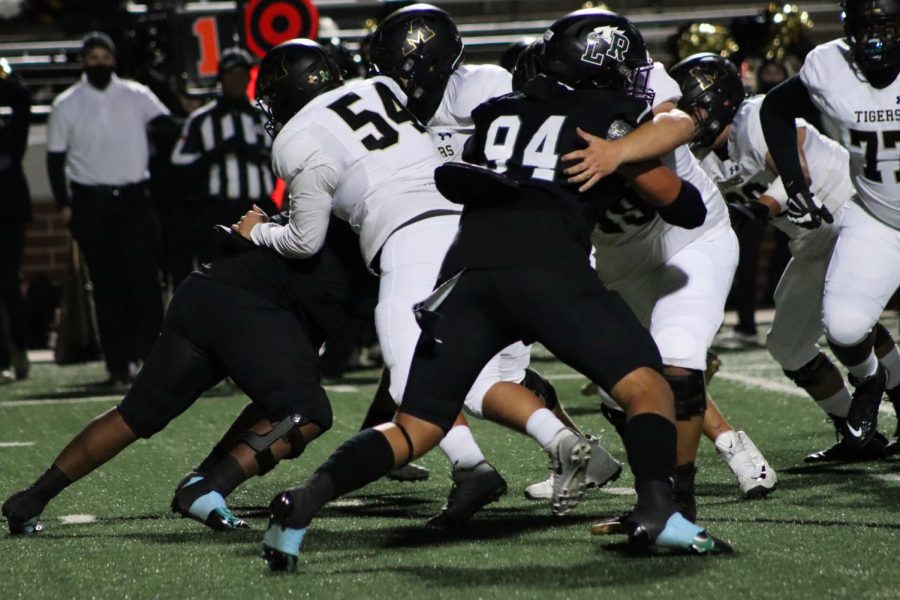 As the Lake Ridge Football season draws to a close, players admit where the shortfalls and successes were.

The Lake Ridge football team is 0-9 so far in this season. Leaving many players, fans, and supporters feeling disappointed and confused. This football season has been full of changes with new Covid guidelines, new coaching staff, and new players therefore the team has had to adapt to the circumstances they were given.

This season has been unlike any other due to circumstances out of the team’s control. However, with the teams’ record many feel that they need to make some big changes fast. Junior and wide receiver, Kamdon McFarland, thinks that the football team could have adapted to the circumstances they were given better.

“In life there are a lot of things you can’t control but you have to overcome those obstacles and do the best you can. I don’t think that we as a team have done that well enough. I don’t think there is any one person or group of people to blame for our season. I think everybody has things they need to work on in order for us to be successful in the future. I feel that a major reason that we have the record we do is because our team isn’t big enough. I think we need to hit the weight room and do our best to get bigger in order to win some games,” McFarland said.

Any season can be bittersweet for senior players on the team. However this one has been especially hard on some seniors due to the struggles they’ve faced. Senior, low safety, Michael Parker wishes that he could’ve left the team on a better note.

“I’ve gotten really close to a lot of the guys on the team for the last four years and so it really sucks that I have to leave them like this. With my senior year already being messed up because of Covid I just wish we would’ve been able to come together and have a good football season. I still enjoy playing the game and I hope the team is really good next year and puts in the work to have a good season. I’m sad that in my last year playing football we haven’t won a game so far but I still cherish the memories I’ve made this season and the seasons in the past,” Parker said.

This season has also been frustrating for some fans to watch. Many fans feel disappointed after watching their team lose for nine straight weeks. Junior, Skylar Parker, admits that at the beginning of the season she would laugh at the team’s losses but now she feels bad for the team.

“It’s sad seeing our team lose over and over again I know they practice hard and it can’t feel good to continuously lose. As a fan it’s embarrassing to see them lose because I sometimes talk trash to other teams and at this point I can’t even back up what I’m saying. Its definitely really frustrating to be a fan right now but I will continue to support the team.I actually feel bad about how poorly this season is going due to the fact that we really don’t know how it feels to win and with all that’s going on in the world a win would feel really good right now I feel like if they worked together more we could have won some games and if some members on the team wouldn’t just worry about themselves,” Parker said.

Along with the fans the drill team, band, cheerleaders, and color guard have continuously supported the Football team despite the scoreboard. Junior, Pamela Tamo, who is a member of the Eagle Elite drill team says that she enjoys supporting the team no matter the outcome.

“I really enjoy showing my support for the team. I feel like if the crowd was more hype the team might do better so I know me and my teammates try to be as encouraging as possible. I feel like the team just needs to get bigger because they are playing against some really big guys so I personally think they have the talent they just need to gain some muscle,” Tamo said.

The football team has faced many challenges this year. Although they haven’t seen the results they hoped for on the scoreboard, some lessons and rewards will come later in life for a team that battled till the end. The team is 0-9 and has a home game against Mansfield High School this Friday at 7:30.