Valeria Delgado: From Student to Teacher 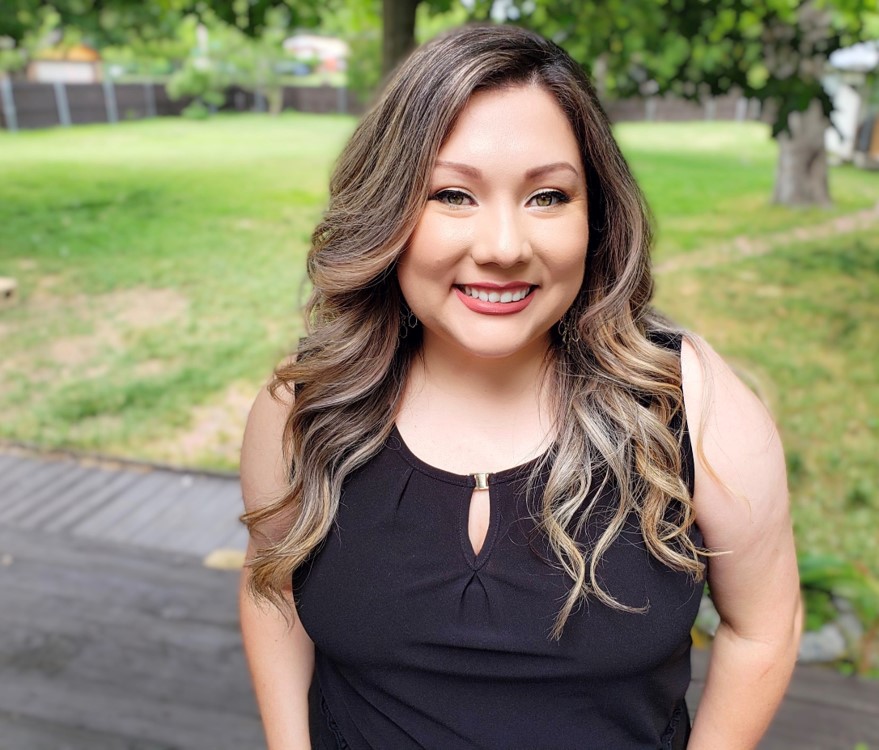 As her dry-erase marker dances across the white board, Valeria Delgado, Algebra 1 teacher, can’t help but muster a proud smile as her students attentively engage in the lesson. With a clarity greater than ever before, Delgado understands the influence she imposes on the individuals who sit in her classroom every day.

“The greatest impact I can make is teaching at this high school. Just from seeing different students, I realize that I can help everyone from all different resources and backgrounds of life,” said Delgado.

Before instilling such a presence, though, Delgado had to overcome numerous tribulations that affected her personal educational endeavours while growing up. Through cultural barriers, financial uncertainty, and stressful schedules, Delgado proved resilient during her journey with one of her greatest passions by being the second woman in her family to graduate from  high school and the first to attend college.

“I always saw education as my window to more opportunities. I knew that if I did well in education, I could be the first person in my family to attend college and succeed in that aspect. My family did go through a lot of hardships while I was growing up, though, which posed some challenges during my educational experience,” stated Delgado.

Born in Mexico, Delgado spent the first three years of her life in her family’s home country, during which she began learning the values her parents honored. After moving to Fort Worth, Texas, Delgado began to construct her own opinions regarding the relationship between her family’s hopes and the goals situated within her own heart.

“My family lived very traditionally in Mexico, so growing up for me was complicated because my family’s idea of a girl was to get married and have kids in the future. I had a very challenging time with this idea because I always wanted to be independent, so it sometimes seemed like my thoughts clashed with the traditional views of my family. Also, my siblings were very much job-driven, so they dropped out of high school to work while my dad and mother only had limited educational experiences. My family was always very supportive of my decision to stay in school, but I did struggle internally at times knowing I wasn’t doing what was expected of me,” said Delgado.

Despite such ambition, the beginning of Delgado’s high school experience proved to be much more insightful than Delgado had originally anticipated.

“During my first semester as a freshman, I didn’t know about rank or GPA because the topic was never stressed until the higher grade levels. When I saw that my friends were ranks #2 and #5, it really hit me because I knew I needed to be top ten percent for potential scholarships. Even though my parents didn’t know about GPA, I knew what goals I wanted to reach and how I was going to get there. So, I began trying a little harder in my classes that same day because I knew I had to get it together. It was definitely a wake-up call,” stated Delgado.

Obtaining a fresh mindset, Delgado also began seeking the extracurricular activities, including JROTC, National Honor Society, and medical terminology club, that strengthened both her character and her transcript. This pursuit did not surface without its own accompanying challenges, though, for Delgado was often outside her comfort zone considering her once-shy nature.

“When I joined the colorguard, we would present the colors at football games. This is a funny memory because we accidentally stopped at the thirty-yard line instead of the 50-yard line during the first game! I was so embarrassed, but I gained an important lesson, too. You are going to make mistakes in life so that you can learn,” said Delgado.

As her senior year approached, Delgado decided to assume more financial responsibility as her mother fell ill. Delgado secured a job at PLS Check Cashers, where she worked 5:00pm to 11:00pm shifts after school.

“Working was very difficult for me especially because of all the extracurricular activities I was doing. Once I started making a paycheck, though, it was hard to quit because I was able to help my parents. I did have to eventually leave that job my senior year because I had to make sure my priority was my grades,” stated Delgado.

As she fulfilled a hectic schedule, one factor always remained constant through Delgado’s doings: math.

“All through my life, I have always loved math. I enjoy the processes involved with math, and I like how there is always a solution. Something about that consistency brings me peace even though I know it might take me forty minutes to do a problem. Even when I was younger, math didn’t always click for me, but I liked the challenge. I later began tutoring my friends, which led me to a realization: I was always a teacher in a sense. That is why I enjoy being a teacher because I love helping people understand things,” said Delgado.

Delgado graduated high school with the title of salutatorian, making her the second woman in her family to complete this level of education.  The first woman, her mother, made a point to attend the event regardless of her illness. Delgado’s dreams appeared to be just on the other side of the podium, but doubt still encircled her mind.

“I did not think my mom was going to make it to my graduation, but she surprised me in the stands after arriving from Mexico. My family was going through a hard time considering my mother’s illness and our financial struggles, so I sometimes felt guilty when thinking about college. I knew I could have just not gone to college so that I could have gotten a job and been of more immediate help,” stated Delgado.

The college experience was very much a matter of trial-and-error for Delgado. Due to a lack of resources, Delgado was not knowledgeable of the planning involved with earning a degree until after obtaining her Associate’s of Arts at Tarrant County Community College. Seeking aid, Delgado moved to the University of Texas at Arlington for a trying, yet beneficial, three years.

“On the transcript, TCC tells you about the eighteen hours of electives. In high school, you can choose any elective that you like, so I chose classes that I thought were fun at TCC. Nobody told me those electives were supposed to be geared towards your major! So, I should have done a lot of math, but I instead took philosophy, psychology, and other classes that I still remember now because they were fun. But, it was a lot of time and money spent on the wrong things that I later regretted. Once I got my Associate’s, I finally transferred to get the UTA process going,” said Delgado.

After graduating with her Bachelor’s of Arts and Mathematics, Delgado cleared a path in her family’s history for those with similar ambitions. Delgado taught for three years after this accomplishment, but she wanted to earn her Master’s degree at UTA so that she can teach college courses if she wishes.

“It was tough going back because I had taken a three-year break. I often doubted if I remembered the math because it was assumed in my first graduate-level class that I already knew certain topics. The knowledge was there somewhere, but there were times when my mind would just blank when answering questions on the board. This did freak me out a bit along with the stress of attending school and teaching at the same time,” stated Delgado.

With nine years of college and her third diploma in hand, Delgado recognizes that she fulfilled an endeavor only dreamed of in her family. The hardships Delgado faced were great in number, but her triumphs made all the difference.

“I was never the smartest kid in my classes, but I was always ‘able.’ No matter what, strive to be the best of your ability and welcome improvement. Challenges will arise, but the ways in which these hardships are overcome matters the most,” said Delgado.