The Trends of Beauty Standards 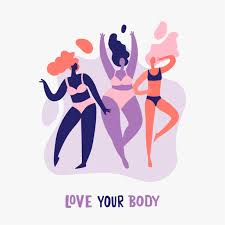 With social media, the standards of beauty tend to go in and out of style.

The media has always magnified unrealistic beauty standards for both male and females. However, with social media existing and new beauty standards can be seen just by scrolling through one’s explore page on Instagram, timeline on Twitter, or For You page on Tik Tok. With a plethora of social media platforms to interact with, new beauty standards have been placed on the forefront for audiences to compare themselves with. Celebrities and influencers such as Kim Kardashian, Megan Thee Stallion, and Kylie Jenner have popularized the hourglass body shape. Although many companies and organizations have been encouraged to have a variety of body types represented in media, the influences on social media can be overwhelming for users on the app. The popularization of social media, women’s bodies tend to go in and out of style which can have negative effects on social media users.

Throughout the twenty-first century, the trend for women’s bodies has changed from having a slim figure similar to Paris Hilton in the 2000’s to having more of an hourglass figure later similar to the Kardashians in the 2010’s. However this can be toxic for impressionable social media users and create unhealthy standards that one holds themselves to by following through with unhealthy diets and or workouts. Junior, Pamela Tamo, says that these beauty standards have caused her to try, to improve her appearance by doing workouts, and eating foods that help her achieve her goal body.

“I have researched foods and workouts that are supposed to help you get that hourglass body shape and followed the diets and exercises in order to achieve that body shape which is glorified on social media.Throughout my life I have definitely seen the change in ideal body type go from being skinny with no curves to being curvy and having some fat as long as it’s in the right places.”

Tamo also admits that trying to obtain the perfect body can be impossible especially if one compares themselves to what they see in social media.

“I think that trying to follow trends in terms of physical traits seen on social media can be extremely dangerous because influencers edit their photos, have personal trainers, personal chefs, and can afford plastic surgery. So what you’re seeing as natural and effortless on social media might’ve have taken hours and thousands of dollars to actually create, and I don’t want to shame the people who do edit their photos and get plastic surgery I just feel like if they were honest about what they’ve done to their bodies social media wouldn’t be as toxic as it is now. However what we see on social media is usually unrealistic. Some Instagram models have large bottoms and no stretch marks which isn’t realistic and can be harmful for those who try to imitate that body type. I feel like as long as one doesn’t overdue it by trying to obtain the ideal body type then it is fine to workout and go on diets as long as you stay healthy and within your personal limits,” Tamo said.

However these changing beauty standards are not limited to just body types. The standard for women’s facial beauty has continued to change too. While the typical blonde hair blue eyed beauty standard remains intact and can be seen in many celebrities such as Margot Robbie, Kristen Bell, and Amanda Seyfried. Black hair and black eyed women are also a part of the ever changing standard which can be seen in celebrities like The Kardashians, Selena Gomez, and Anne Hathaway. However, the newest beauty standard is light skin black women with looser curls which can be seen in actresses like Zendaya, Amandla Stenberg, and Instagram models like Yasmeen Nicole, who has 1.2 million followers on Instagram. While these beauty standards are somewhat more inclusive, they can have negative effects on the self esteem of those who don’t fit into them. However, these beauty standards can also have a positive change on those who recognize the negative aspects of them. This was the case for junior, Skylar Parker, who feels as though the beauty standards she sees on social media gave her a taste of reality.

“I’ve had social media from a very young age so these beauty standards have been shoved down my throat for literally my entire childhood. I used to try to fit into the trends I saw on social media by dressing a certain way or doing my hair a certain way but the summer going into my freshman year I kind of realized that as a black girl with 4c hair I’ll never fit into the beauty standard but that doesn’t mean I’m not beautiful or any less beautiful than the ideal image of women that I see on social media. I started to change the people I followed and I really got inspired to be myself and so I decided to cut my hair off which definitely isn’t the beauty standard but I’m confident with no hair and I feel like it fits me. So I feel that while social media has its negative effects especially for young girls I think that if it is used in the right way it can have a positive impact as well,” Parker said.

Since women are constantly being judged by their looks, it can be hard for them to post a picture or video of themselves without getting judged or over sexualized based on the clothes they are wearing. It is not uncommon for a woman to be called an object in a Tik Tok comment section, body shamed due to their outfit, or their body type as a whole. Junior, Madison Martinez, says that these comments can have a negative affect not just on the creator of the video but also for a person who reads the comments.

“Sometimes I’ll be watching a Tik Tok of a girl dancing and think nothing of it. Then when I open up the comments they will be body shaming an innocent video of a girl who was just following a dance trend. I feel like no girl can not get body shamed like if you’re curvy then you’re an object and if you’re skinny then you don’t eat and if you’re overweight then you’re a whale. I just feel like no matter how a girl looks she’s going to get body shamed so whenever I post I’m extra critical of how I look so that just in case someone does say something rude about the way I look I’m already prepared mentally for it,” Martinez said.

While the beauty standards continue to evolve they remain toxic for impressionable viewers and can affect one’s self esteem and the way they feel about themselves.