Tinkering with the Building Blocks of Life 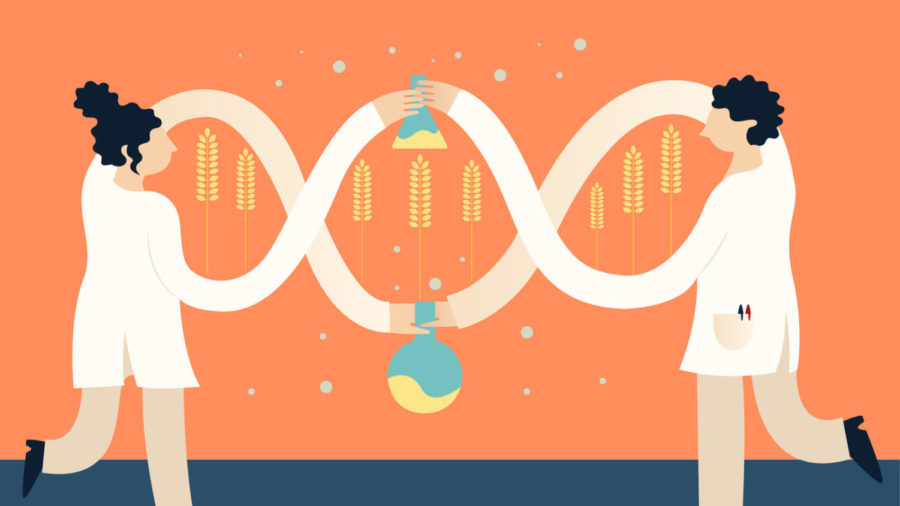 Genetic engineering is the editing and recombination of DNA for various biological purposes.

40,000 times slimmer than a human hair, one critical molecule is responsible for all life on earth: DNA. More formally referred to as deoxyribonucleic acid, DNA is a biomolecule consisting of nitrogenous bases that code for genetic structure within all organisms on Earth. Biologists have been pondering the extensive capabilities of this microscopic wonder for decades, and recent discoveries have positioned these scientists one step further towards influencing the very blueprint of biotic existence. Of course, inheritance within plants and animals alike is a rather random process that currently cannot be controlled in its entirety. But, biologists are striving towards altering traits, such as pre-existing medical conditions, that can be clearly identified through lab sampling and ancestral patterns. Sarah Adetosoye, freshman, outlines the specific process catalyzing both scientific and moral debate in consideration of DNA alterations.

“Genetic engineering is improving as biologists are figuring out more about complex plants and animals. Since it is kind of new, though, we are still learning about the practice, and there could be side effects yet to be discovered,” said Adetosoye.

For a brief moment, picture this: a sixteen year-old student awakes for yet another day of high school courses. Before leaving his home, he pours himself a bowl of Kellogg’s Corn Flakes cereal complete with milk and sliced strawberries. The components of this breakfast were assembled seemingly out of routine, for the true intricacy of the meal has remained undiscovered by the student for more than a decade. The reality floating within the bowl is not difficult to assign words to, but the modifications undergone by the food products just detailed extend beyond basic description.

The human desire to adjust certain genetic characteristics within organisms is not a new concept, though, for numerous individuals have been determining the types of plants and animals that should be present in particular areas for thousands of years. Selective breeding aided this initiative as some growing populations in earlier centuries tended larger cultivation fields and livestock herds. It was not until 1973 that biochemists Stanley Cohen and Herbert Boyer invented the practice of genetic engineering by inserting DNA derived from one bacterium into another. Doors were immediately unlocked after this immense discovery for individuals today to open and explore. Dr. David M. Bodine, Chief and Senior Investigator of the Genetics and Molecular Biology Branch at the National Human Genome Research Institute, specifies genetic engineering as applied to today’s understanding.

“To me, genetic engineering, broadly defined, means that you are taking pieces of DNA and combining them with other pieces of DNA. [This] doesn’t really happen in nature, but is something that you engineer in your own laboratory and test tubes. And then taking what you have engineered and propagating that in any number of different organisms that range from bacterial cells to yeast cells, to plants and animals,” stated Dr. Bodine.

One major outlet of genetic engineering resides in agriculture, which is the deliberate tending of plants and animals to produce food and materials. Farmers today are partnering with biochemists to create “miracle seeds” geared towards increasing pest resistance, enhancing appearance, and expanding yields. The Center for Food Safety estimates that upwards of 92% of corn, 94% of soybeans, and 94% of cotton harvested annually in the United States is genetically modified. The cultivation of these crops does not come without consequences, though, as described by freshman Roma Raythattha.

“Nature is an extremely complex interrelated chain, and the introduction of genetically modified organisms may have irreversible effects not even known. Many potential disasters can be produced as a result of biological modifications including hazardous pollution. When chemicals found in herbicides and pesticides runoff during times of precipitation, the organisms consuming the now-polluted water can eventually decrease in number and lessen biodiversity. Conversely, genetic engineering can be a very good thing within plants because more crops can be harvested annually due to the protection offered by these pesticides and some foods, such as fruits, can last longer amounts of time without spoiling,” said Raythattha.

Such outcomes are prompting additional awareness throughout consumer populations regarding the extent to which human health can be impacted by GMOs, or genetically modified organisms. GMOs can elongate the shelf life of some produce items by a week according to an experiment conducted by Purdue University, but questions are continuing to be raised about the introduction of foreign chemicals into body systems. Mya Dorm, freshman, explains the pertinence of effective product labeling when determining the sources and substances implemented into varying food articles.

“People need to know where their food comes from. Consumers should be notified about the GMOs in their products because there is an entire process behind the creation of, for example, a burger that involves the treatment of plants and animals. When people recognize a product, they know it because of marketing, so companies can disclose this information by printing detailed nutrition labels. Overall, despite the still-blurry health risks imposed by GMOs, I think food systems, at least in the United States, have benefited from this branch of genetic engineering. Many individuals can purchase these food items at relatively low prices due to the less extensive labor required on GMO-producing fields, and some companies do remain honest about how their products go from soil to grocery store shelves,” stated Dorm.

Genetic engineering also assumes a significant role in the medical field. Classified as a subsect of genetic engineering, procedures such as gene therapy strive to physically change the DNA sequences of organisms for the sole purpose of disease prevention. The Mayo Clinic has reported that gene therapy has the potential to cure illnesses such as cancer, diabetes, heart disease, hemophilia, and cystic fibrosis. Taimwor Chaudhary, senior, understands the potential significance of genetic engineering in people not even born yet to generations to come.

“Regarding human genetics, many dangerous chronic diseases can be reduced in the future by promoting a certain phenotype in a developing person within the womb. In a very general term, this initiative speeds up evolution because biological characteristics, including illness attainment, are being subtracted from the gene pools of particular populations,” stated Chaudhary.

Not all genetic experimentation conducted by biologists has been centered around minimizing ailments, for altering non-disease related traits has also been a discussion point. “Designer babies” are beginning to be created at the requests of parents willing to pay hundreds of thousands of dollars for exclusive choices of traits including gender, eye color, and height. Adetosoye predicts the stances occupied by different individuals in respect to this process.

“There is a large chance that not all people will agree with the practice of genetic engineering as time progresses. I personally do not think it is ethical for the DNA of a human embryo to be altered strictly for the purposes of producing specific traits deemed ‘attractive.’ But, I do understand that these decisions are ultimately made by parents who know what is safe and will help their children in the long-run,” said Adetosoye.

The controversial dialogue accompanying human embryology genetic engineering seemingly approaches one last angle capable of dividing populations: socioeconomics. Gene therapy costs US$1 million for one patient alone according to the National Institute of Health, which can be a staggering figure for many individuals struggling to access the treatment. Chaudhary expresses the possibility for contentions to arise between groups involved with this practice.

“Genetic engineering is still a relatively new topic, and the richest class in any given society is usually the first group to get their hands on any new bioscience subject. So, there might be a chance that some people who have a lot of capital will utilize this new method to diminish diseases within their own children and possibly even manipulate their genome to make them a bit smarter or more intuitive. Additionally, insurance companies and pharmaceuticals may view genetic engineering institutions as being direct competition. The amounts of specialized medicines and health insurance could decrease over time if demands for these services are overshadowed by lab-created health,” stated Chaudhary.

Despite the prominent debate already encompassing genetic engineering, scientific inquiry continues to advance with marveling curiosity. The capacity to which genetic engineering could affect society is being revealed everyday through the presence of Elizabeth Anne, the world’s first cloned black-footed ferret, the formation of glow-in-the-dark beagles, and countless other organisms. Adetosoye finds a sense of intrigue within the unique nature of genetic engineering.

“If positive results generate throughout time, the practice could advance into a really big thing. It might not be natural and could have bad effects, but genetic engineering could also have good outcomes. Overall, it depends on the person and their honest opinion. We will just have to wait and see what the future reveals!” said Adetosoye.