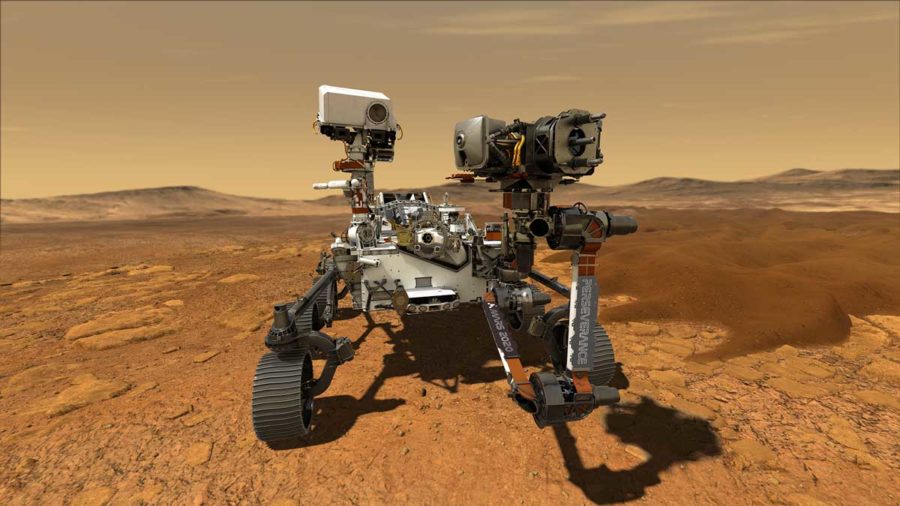 Peering through the quartz glass windows of their school, a student views vast rows of houses situated before towering mountains. The sky is smeared with wisps of clouds, except the horizon is tinted ruby instead of the sapphire familiar to so many. The emerald of grass remains absent, for bronze-hued soil spans for as far as the eye can see. Securing their space suit, the student prepares to return to their Martian home at the sound of the bell.

The astronomy spotlight has recently been shining on Mars through the National Aeronautics and Space Administration’s, NASA’s, Mars 2020 Mission. Launched on July 30, 2020, the rover Perseverance is purposed to gather information detailing the physical composition, climate, and resources available on the Red Planet. Perseverance successfully landed on Mars on February 18, 2021 and is now en route to fulfill these objectives. NASA outlines the venture being pursued by the rover in their “Mars 2020 Mission Overview.”

“The Mars 2020 Perseverance Rover will search for signs of ancient microbial life, which will advance NASA’s quest to explore the past habitability of Mars. The rover has a drill to collect core samples of Martian rock and soil, then store them in sealed tubes for pickup by a future mission that would ferry them back to Earth for detailed analysis. Perseverance will also test technologies to help pave the way for future human exploration of Mars,” said NASA.

Despite the recent timing of this exploration, Mars has been a subject of interest for hundreds of years. In 1610, Italian astronomer Galileo Galilei assigned the name ‘Mars’ after the Roman god of war due to the planet’s red surface. 49 missions have been centered around Mars since the seventeenth century, the first of which, Mariner 4, captured the first photos of another planet besides Earth in 1965. Taimoor Chaudhary, senior, explains the significance of Mariner 4.

“The first mission to Mars opened up a conversation about the context of the Earth in relation to its extraterrestrial neighbors. The mission provided a basis on which the Mars 2020 mission is flourishing because astronomers can view the different imaging collected from the multiple Mariner missions and deduce different physical changes on Mars. If I were living during the 1960s, I definitely would have wanted to witness the launching of the Mariner 4 spacecraft because that was a key moment in mankind,” said Chaudhary.

As a byproduct of the Perseverance Mission, many individuals are evoking dialogues surrounding the ability of Mars to sustain complex life. The planet is extremely cold, with the average temperature resting at minus 80 degrees Fahrenheit. With the air composition containing more than 95% carbon dioxide and less than 1% oxygen, humans would be incapable of breathing without the aid of oxygen tanks. Chloe Heffington, freshman, provides additional reasoning as to why she would forfeit the opportunity to inhabit Mars.

“If I were offered the chance to live on Mars, I would decline. Due to the vast amounts of information still being gathered, I think I would feel unsafe on a planet that has yet to host permanent human residency for long periods of time. We have already established a way of life on Earth—we have infrastructure, defined governance systems, and homes that, for the most part, can withstand the weather conditions carefully studied by meteorologists. I would feel greatly concerned if the majority of the human population decided to relocate to Mars in the near future because so many resources would need to be deprived from Earth, including materials that would have to help people do something as seemingly simple as breathing due to the thin atmosphere on Mars,” said Heffington.

Conversely, some individuals infer that the Red Planet can offer a solution to overpopulation on Earth and provide time for the regeneration of agricultural lands. AI Space Factory, an advanced construction technologies company located in the United States, has already 3-D printed a beehive-shaped house NASA deems proficient for Mars. The ‘hives’ can be assembled directly on Martian soil and provide space for 4 people. Despite these housing assurances, NASA officials have yet to clearly announce plans of the multiple systems that could promote efficient Martian life. Lorelai Cherry, freshman, infers the potential that could be stored within the Red Planet.

“I would be open to residing on Mars so long as proper precautions are made. If we train our minds to think outside of Earth’s atmosphere, there can potentially be benefits to living on new soil. It would be thrilling to see how an essentially blank canvas is organized and what structures and institutions would be created on Mars. Sure, there are definitely some nerve-wracking aspects accompanying living on a planet even rovers have only recently landed upon. Nonetheless, I am extremely curious to see how far humanity can travel,” said Cherry.

Whether a subject of scientific interest or the potential new home of some, Mars is continuing to play the main character in an ongoing narrative of advancement. The Perseverance Mission is one of the many chapters shaping mankind’s potential, and the plot is predicted to only continue. Rick Wickel, Algebra II and Pre-Calculus teacher, highlights the resilience exerted by the individuals pursuing the mission.

“The people who are putting themselves into stressful environments for long durations, especially astronauts, so we can advance our knowledge are heroes to humanity. Through their work, we are better informed of the universe that has witnessed numerous shifts from hunting and gathering to the deploying of rovers that can be operated from Earth. We owe it to the future to keep on exploring,” said Wickel.