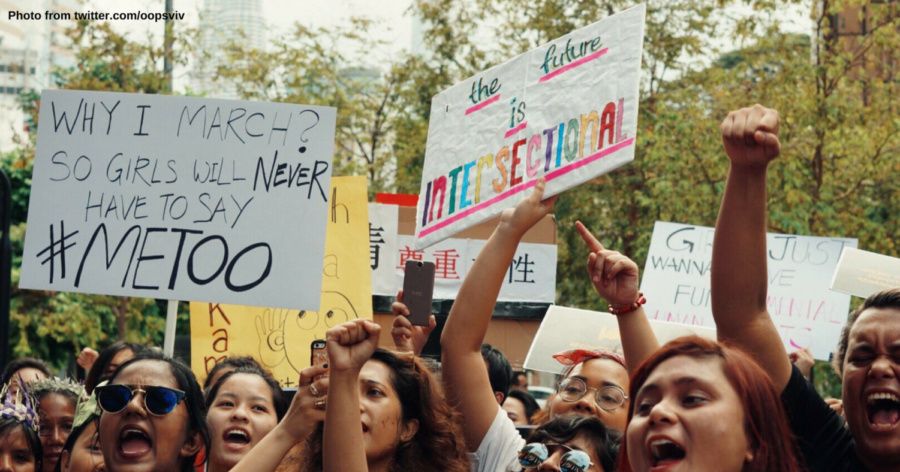 Malaysian Women's March on March 10th for equality and representations.

Intersectionality bridges the differences between minority groups creating new perspectives for each individual. Those of multiple groups are given unique perspectives to understanding other minority issues. The term first introduced by Kimberle Crenshaw, a legal scholar in 1989, researched how social identities overlap, giving people a disadvantage or advantage from systems in power.

Over the years, the number of mixed-race individuals continues to grow, reaching 2.8% in 2020, according to the U.S. Census Bureau. Growing up Black and Hispanic, Kylie Wagner, senior, became accustomed to experiencing stark cultural differences. Wagner saw how each culture celebrated their own backgrounds; sharing food, music, and language. Growing up with two different cultures, she learned to share their differences and experiences.

“Coming from two different cultures,” Wagner said. “My mom, being an immigrant, and the way that she raised us, is different than how my dad was brought up. I see things from two different perspectives, regardless that they’re both people of color. Mexican parents and black parents are very different, and I think that my parents have taught me a lot. I was able to learn a lot about other people in the world through their eyes and their values and morals.”

A person’s physical appearance can be widely misinterpreted by others, especially for senior, Estella Morales. Raised with an ethnically Spanish background, Morales was born mixed with Black and White parents. They quickly learned how to navigate through friendships as a young kid, embracing who she was.

“I remember a lot of times as a kid, I would be discriminated and mislabeled as the Mexican kid and a lot of people wouldn’t want to hang around me because of my ethnic background, which did make it hard for me to form friends as a kid,” Morales said. “But I just tried to power through it and seek out the people who are truly worthy of my friendship.”

Much like Wagner, Morales grew up in a diverse household that held high expectations. She experienced issues bridging between being a person of color and the standards for women. Morales grew grateful for the caution they were taught, despite initially disapproving of the methods. The cross between growing up in a cultural household as a woman impacted their upbringing.

“Growing up is a lot different than most because of those cultures, especially Hispanic and black cultures,” Morales said. “They’re very traditional and their values and they’re very strict on the way that they upbringing their women, which kind of made it difficult. I was held to a lot of higher standards than most of those in my family and most of those around me. So, it did toughen me a little bit but it also makes it frustrating to go out and then see all of these people who are living more freely than I am, but also I’m very grateful for it because it’s helped me learn a lot, and be very wary of things that can actually happen to me in the real world.”

Realities women face grow from years of historical experience, from wage gaps, abortion laws, and fighting continuously for their rights. While being a woman in today’s society, Wagner has seen how others approach a simple hobby, seen to be dominated by men, such as sports, games, and etc. Despite women making up 50.8% of the United States, according to the U.S. Census Bureau, they continue to face challenges in the workplace, at schools, and within their own homes.

“There’s some truth in the phrase that girls can’t do anything without being slandered for it. Regardless if you like sports, it’s ‘oh well, do you really like sports or do you just the guys who play?’ or for music and for breathing,” Wagner said. “We’re always constantly being belittled by other people just because we’re women.”

Overlapping experiences from her multiple identities, Morales learns from others. Intersecting communities grows a unique understanding of minority issues from experience and communication. Sharing the different cultures gave Morales a new approach to allyship.

“I definitely feel it helps me resonate with a lot of issues happening and other minority groups,” Morales said. “It helps me better understand what they’re going through, I may not know exactly what they’re going through, but I am able to sympathize with it and it’s helped me become a better ally to a lot of people. It’s helped me be there for people and help those who really need it most, as opposed to just following a majority ideal. It’s really helped me understand the way that a lot of minority groups can think and feel, and not be so quick to judge them in any way.”

Every individual has a different perspective as unique combinations of identity come together. Being a woman of color, Samari Goffney, 11, finds herself working harder to prove herself in society. From codeswitching, switching between dialects varied around certain groups of people, such as African American Vernacular English, to finding a community she can relate to, Goffney sees her identity as a uniting experience.

“I have to do my best in society, getting into college, having a good job, owning a business,” Goffney said. “It shows that women can do the same thing as men can. In the 20s, all the way up to the 60s, we were portrayed as housewives and mothers, we couldn’t really go to school and work on what we wanted to work on. Being part of the Tiktok community, everyone shares their stories about how hard it is for them to be a minority in America. We all are going through something similar and I think it’s good for us to come together and fight against the superior race.”

While there are positive aspects to intersectionality, there is fear that duplicates as communities intersect. Wagner’s parents have shielded their children in hopes to keep them safe, but as Wagner grows up, she begins to experience the realities of living as a woman of color.  In a year where discrimination and hate cases come into the spotlight, fear sets in for Wagner and her family.

“Both a person of color and a woman, there’s always a fear an underlying fear of prejudice for being black, or Hispanic,” Wagner said. “Just your fear of your life and the fear of your family’s life. And then being a woman, the fear of not making an appearance, not making enough money, not being enough, not being able to build a life for yourself, or a future for your family because you’re constantly afraid of someone taking that opportunity away from you.”

Immersed in a diverse community creates acceptance within young minds for Morales. It allows her to see multiple different perspectives, protecting themselves from affecting the way they form relationships with others. Identifying as gender-fluid and pan-sexual, Morales chooses to not let her identity define them.

“It’s hard for me to explain gender and sexuality because I don’t really see it as something that defines me,” Morales said. “I just live my life, and the way that I see myself is not necessarily how others are going to see me, and that’s fine. The way that I see it, so long as I know who I am, what I stand for, and who I am on the inside, it doesn’t really matter how others perceive me. At the end of the day, my perception of me is going to come first, so if people want to judge me based off of my gender orientation or my sexual orientation, that’s fine, just so long as I know my worth.”

Intersectionality presents itself differently for each individual. As America becomes more diverse, communities begin to intertwine and build empathy between each other. It explores how communities intersect, identifying how they connect, interact, and impact each other.