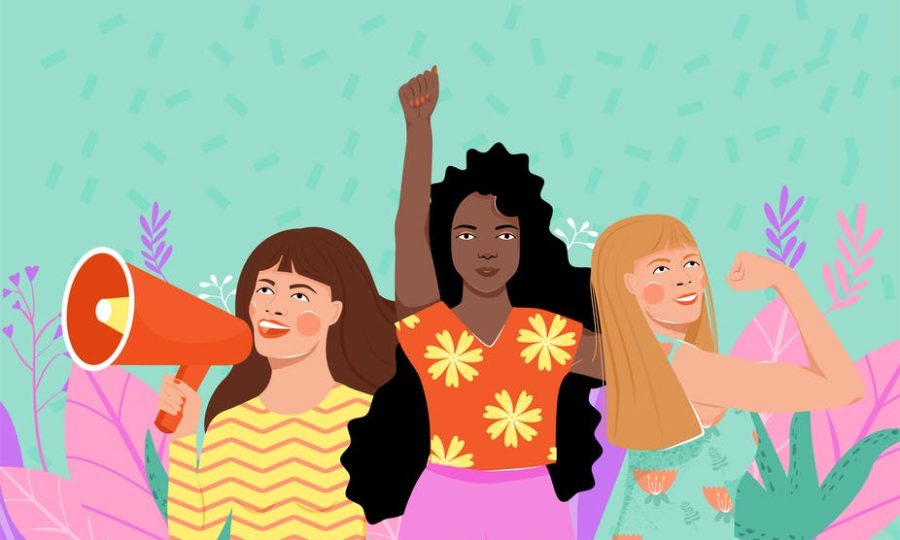 Feminism in America has changed greatly over the years. In the late 1800’s to the early 1900’s feminists were fighting for their right to vote, work in fair condition women and other issues women of the time faced on a day to day basis. Now, modern day feminists fight for many things such as closing the wage gap, ending sexist social norms, and holding men accountable for their unwanted actions which can be seen in the MeToo movement. However, the feminist movement has faced controversy in recent years with some arguing that feminists are not inclusive enough and don’t focus on issues specific to women of color and members of the LGBTQ+ community, who face discrimination specific to their race, sexuality, or gender identity. Due to the controversy surrounding the feminist movement, womanism has gained popularity in recent years. Womanism focuses more on issues women face specific to their race, background, sexuality, etc.

In recent years, many people have drawn to light how early feminist heroes of the past were racist and thought that only white women should be able to vote and felt that they were better than women of color. Some argue that these women should not be praised as feminist, since they didn’t want equal rights for all women, while others argue that it was a sign of the times and they should still be praised due to their activism and accomplishments for the rights of white women. More recently, singer, Taylor Swift, came under fire for being a “one sided” feminist when she criticized the new Netflix show “Ginny and Georgia.” The singer was upset after the show commented on the extent of her dating life. This resulted with Swift calling out the show and Netflix on Twitter. Many of her fans were outraged, causing them to give the show bad ratings and complain about the show on social media platforms. While most people agree that the joke was not funny and uncalled for, some are calling out Swift for being a hypocrite and a performative activist. Some feel as though Swift overreacted by calling out the show on Twitter with her large fan base, who then attacked the mixed race actress, Antonia Gentry, who plays Ginny, instead of the writers behind the joke.

Netflix has also come under fire with their new movie “Moxie” in which there was representation for Afro Latina, Asian, Transgender and mixed race women. However, the main character and hero was a cis straight white female. This left some arguing that the movie played into the white savior role. Junior, Kami Chaddick, understands how this form of feminism can be harmful and thinks that womanism is a better alternative.

“Feminism is more broad than womanism it talks about all women in general, where as womanism is focused on the gender, class, and race of a woman, which makes it more specific, and is to me more inclusive because it talks about the issues of, black transgender woman, who suffer the most as women in society,” Chaddick said.

“In my opinion, black women are the least protected group of people in America because they are hyper sexualized and seen as older than they are from a young age, which is extremely damaging because it forces them to grow up faster than their peers and makes them have to act tougher as a way to protect themselves which plays into the angry black woman stereotype.” Williams said.

Junior Analisa Arenas says that her ethnicity has caused her to be seen differently in America.

A lot of the times as a Mexican American I’m faced with a lot of stereotypes. Some including that I know how to clean well or cook food or have a huge family. Even though some of these may be true, I feel as though it has nothing to do with my race but rather who I am as a person. Us women are seen as someone who’a probably going to have a child at a young age. Someone who might get mixed in with the wrong crowd. Latina women are also fetishized and seen as these “exotic” women with desirable assets like big lips, tiny waist, big butt. And when we don’t meet this standard we are considered ugly.”

Feminism has also been called out for trying to make women seem better than men instead of as equals. Junior, Noah Nurse, thinks that the “girl boss” feminism can have unintended negative effects on women by giving them power just to shut them up.

“I think the only form of feminism that is toxic would be “girlboss” feminism, which is the kind of feminism that puts women in positions of power within the capitalism patriarchy for the sole purpose of upholding said capitalist patriarchy. “Girlboss” feminism can be dangerous because it symbolically gives women power while still preserving a status quo that prioritizes the interests of wealthy and powerful men,” Nurse said.

All in all women in America have always faced struggles because of their sex however minorities face a blend of racism and sexism which can often be ignored by the feminist movement.