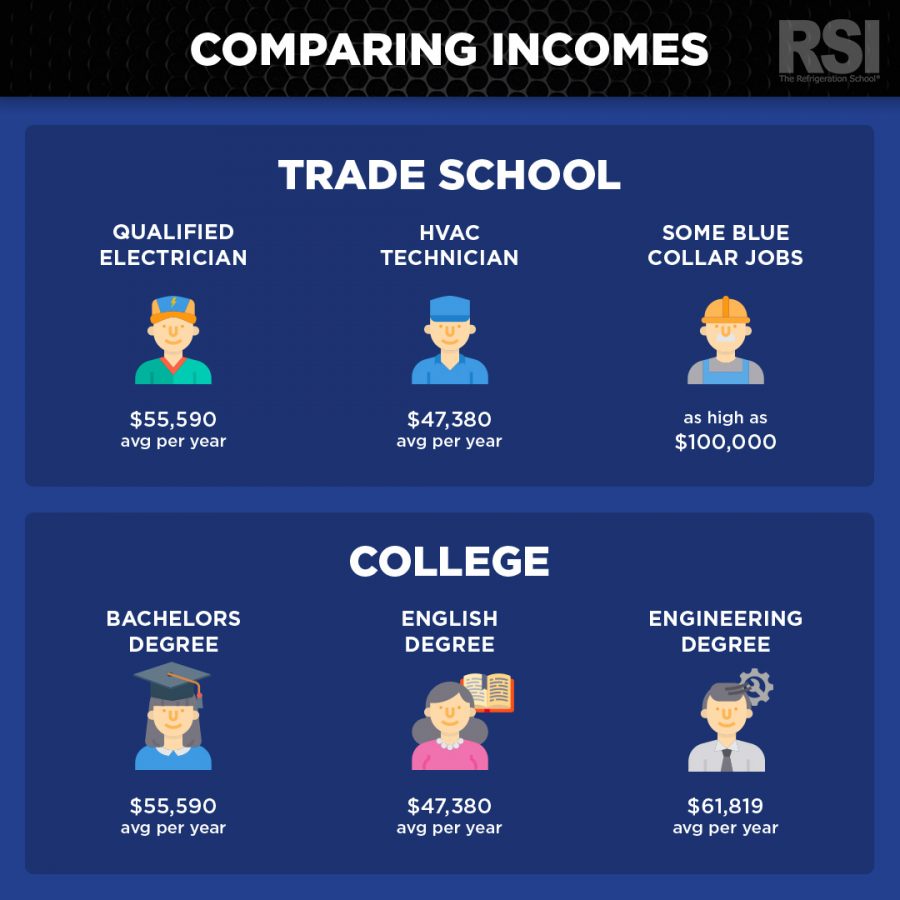 Comparison of incomes from traditional jobs vs blue-collar jobs

Trade schools are institutions dating back to the early 1800s, where students can get an education for jobs that include technology, construction, and electricity, in order to receive a certificate. Some students attend trade schools as an alternative to college. Factors such as economic status, availability, and interests impact whether a student chooses a trade school or college. Despite making less than a traditional job, enrollment in trade schools continues to rise. According to the National Center for Education Statistics, the number of students enrolled in trade schools went from 9.6 million in 1999 to 16 million in 2014.

One of the benefits of attending traditional college over trade school is that you get more fortuity out of it. Trade schools are designed typically for one career path and don’t allow for much freedom when it comes to what you study.

AVID coordinator, Shalyn Colbert, believes that college gives students the ability to have a wider variety compared to trade school.

“It just gives you more opportunity. It’s a big networking pool so you meet a lot of people and those different major areas will help students with internships and things like that,” said Colbert.

On the other end of the spectrum, Colbert also understands how the “narrow” pathway trade school offers can be beneficial.

“I think trade schools are more specific. I can go to a trade school and get those certificates in six months and less money, rather than going through four years and taking courses that won’t necessarily transfer over to what I want to do in the real world,” stated Colbert.

Senior, Yoshwa Kyei, doesn’t see the possible advantages of attending a trade school, because she thinks it’s better to keep your focus on only one career.

“I would not see any benefits. I would focus my education on one facet that I am interested in and that will give me the best future outcome. If it’s a trade school I will choose that only. If it’s a college, then I would choose that,” Kyei said.

Kyei views people who receive an education from trade schools as important because of the jobs they do such as electricians and machine operators.

“I view them as the backbone of our society because they do the hard jobs other people don’t want to do. Not everyone can go to a 4-year university and do accounting, so the trade school workers should be praised for their role in our world,” Kyei stated.

“I think most people go to trade schools instead of college because either it’s cheaper or their career path is better going to trade school than college,” Reyes stated.

Sophomore, Kyle Okoth would rather go to a traditional college than a trade school because his desired future career, a veterinarian, requires him to further his career at a college.

Trade schools definitely have much to offer to the people who attend them, however, if a student doesn’t want to be some type of handyman, they may not find their calling. In that case, going to college would probably be the best option for them.

While it may be more “traditional” or seen as more preferred to go to a college, as a society, trade school graduates keep our world running and help us with many things, specifically electricity and technology.