To Dance or Not to Dance, That is the Question 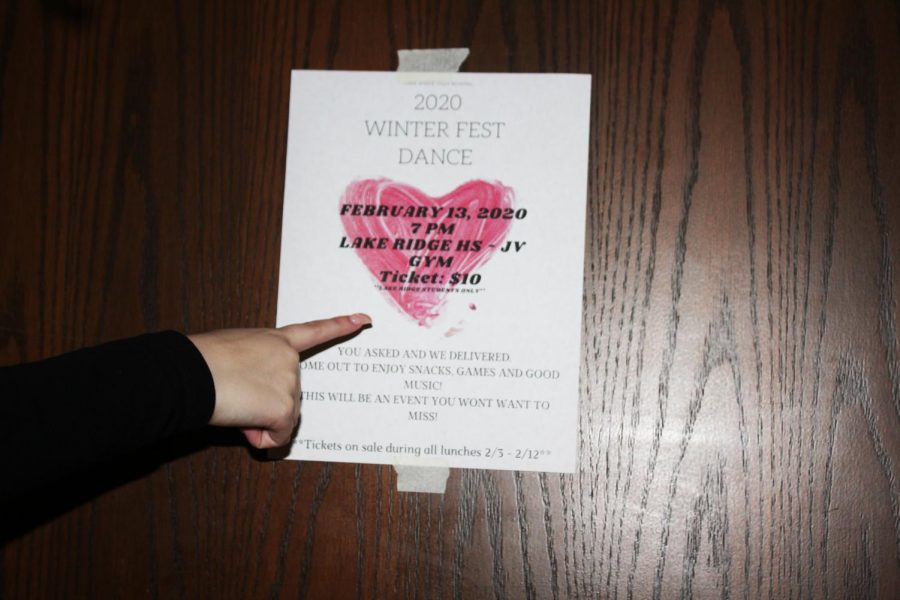 For the first time in Lake Ridge History, there will be a Valentine's Day dance.

This year Lake Ridge is hosting a Valentine’s Day  dance to raise money for the senior prom. Depending on how many people come to the dance determines whether or not there will be more dances in the future. While many students have different opinions on whether or not the dance is a good idea most can agree that the money is for a good cause.

While the dance is for the senior prom all classes are welcome to go to the dance. Some people who aren’t seniors don’t see why they should raise money for another class. Sophomore Skylar Parker thinks the tickets are to expensive especially since the

“Personally I would like to go to the dance because it seems like a good place to hangout with friends and listen to music. I don’t really mind that the money is for the senior class even though it doesn’t benefit me, because I’m glad that they could have a good prom and when I’m a senior I would want the freshmen to donate to my prom,” Diaz said.

A ticket to the dance is ten dollars which is more than some students are used to/willing to pay. Sophomore Skylar Parker says that she would have gone to the dance if the tickets weren’t so expensive.

“I would like to go to the dance but the tickets are too expensive I just can’t see myself spending ten dollars on a dance in the cafeteria, maybe if it was going to be a nice dance that was going to have food and stuff I might have paid the ten dollars, but the money isn’t even going to something that benefits me so there’s no point in me going,” Parker said.

“I would like to go to the dance because I would get to see my school friends outside of the normal school setting and it would be fun to meet new people and have a good time with people I don’t usually talk to. The tickets are kind of expensive but I’d pay for it because the dance seems like it would be worth it and I want the seniors to have a really nice prom,” Harrison said.

Since the money is going towards the senior prom it makes since that a lot of seniors would want to go to the dance, however senior Mareo Jackson doesn’t think there is a point in going to the dance.

“They should have had a dance when we were freshmen because now it’s too late and nobody wants to go to their first school dance senior year unless it’s prom or homecoming. I feel like the dance is going to be really awkward and only a few people will actually be dancing and everyone else will just be standing there,” Jackson said.

So while everyone has different opinions on the dance a lot is riding on this dance like the entire future of Lake Ridge dances and this years senior prom.