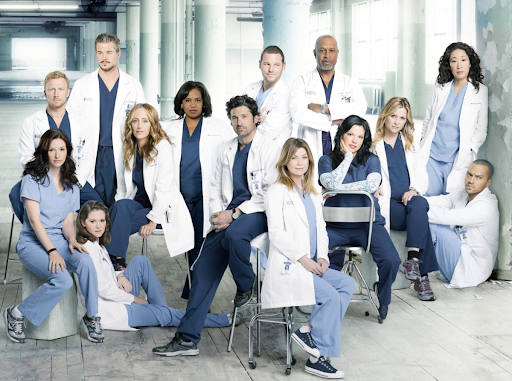 The loud sirens fill the street as the ambulance rushes over to the emergency room. The patient is taken into the surgery room and then it suddenly cuts to a commercial. Groans of anger fill the room as the anticipation of what happens next grows.

Over the last few decades, many older, career based shows are starting to resurface and gain more popularity with younger generations. These career based shows tend to open people’s eyes to see how criminal justice or the medical field are run. After seeing how it works, it has inspired many people to go into those fields. Junior, Krisha Jacinto, has been inspired by the show Grey’s Anatomy and plans to become a surgeon in the future.

“Grey’s Anatomy increased my interest in becoming a surgeon. There was this one episode of Grey’s Anatomy, season 3 episode 15. It was about a ferry boat accident in Seattle and the surgeons came to the location and helped a lot of people. This made me realize that I want to help people too,” stated Jacinto.

Although these shows display to people how those particular fields work, there is a big part of it that is dramatized. Whether it be the young attractive doctors in medical shows to how a court case occurs, TV shows highlight a much more glamorized version of it. Psychology and sociology teacher, Heather Willson, believes that a lot of these shows allow people to see the expectations, but not the reality of the careers.

“It’s like anything on TV, you see the traditional American family and a lot of kids in class will agree that their family doesn’t look like that. Same thing with Grey’s Anatomy or any career based show, there’s a lot of people who go into the medical field thinking it’s going to be one way and it’s not. You see all these cutting edge, heart racing activities in a crisis situation and you see that they’re doing a lot, but it won’t always be like in the shows,” stated Willson.

After paying attention to the characters actions and emotions, a lot of people tend to influence their own behaviors by them. This has caused many people to see this as very odd. However, Junior, Katelyn Rodriguez, sees this as something normal because it is hard not to get influenced.

“I feel like it’s normal for people to act a certain way after watching shows like Criminal Minds, but I know people who will do a full 180 because of certain topics in those shows. It’s normal to feel more aware, but that doesn’t mean that everyone agrees with this,” stated Rodriguez.

Watching an intense episode of Criminal Minds or Blacklist, has caused a lot of people to change the way they look at the world. Sometimes fear or angst is the only thing that they can think of after watching. Freshman, Sara Karajeh, has stopped going out at night amidst her paranoia.

“After watching Criminal Minds, I have found myself feeling much more paranoid than I already am. I hate it when people walk behind me and I have stopped going out for runs at night. Honestly, it made me realize that you cannot trust anyone no matter how much you think you know them,” said Karajeh.

Career based shows don’t only cover the experiences in them, they also emphasize issues that occur outside of the main setting. By covering issues like mental health or poverty, it has caused many people to learn more about their surroundings. Freshman, Bianca Medina Ardizzi, has opened her eyes to many issues that people tend to ignore.

“I’ve learned a lot about how horrible the world can be and educated myself on subjects like mental health, poverty, addiction, crime, trafficking, abuse and other topics I probably wouldn’t have learned without watching criminal shows. Especially since a lot of people in real life tend to pretend that struggles like these don’t exist because it makes them uncomfortable. Shows aren’t afraid to expose and spread awareness over these issues,” stated Ardizzi.

Although a lot of people don’t think this, T.V. shows influence a lot about a person. Whether it may be their view on the world, career choices, or personalities, the shows people watch can change what they think about many things.