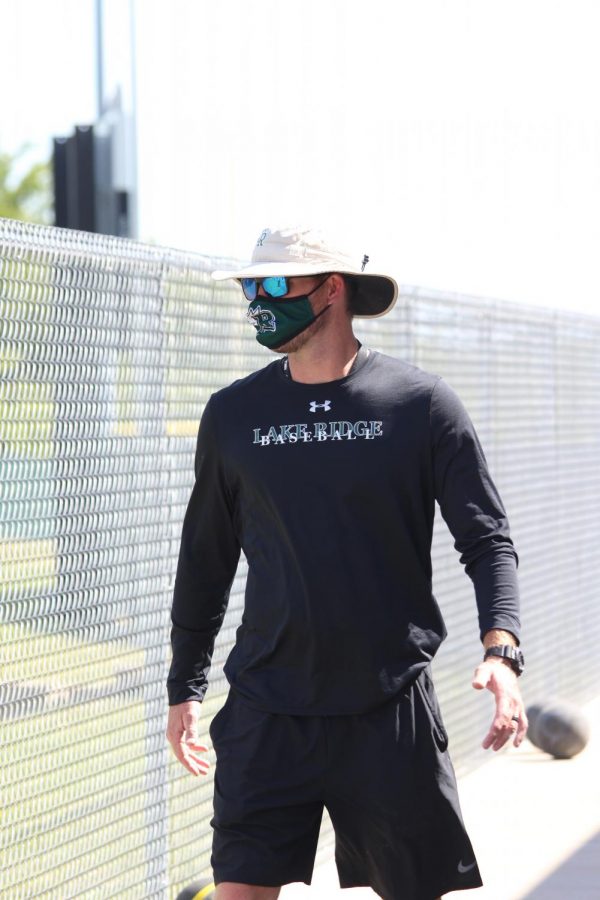 Baseball coach, Michael Smith, has made an impact both on the field and in the classroom.

Father, coach, and Social Studies teacher, a man who makes it his mission to bring light into the lives of people around him.

Almost everyone dreams about being something important when they grow up. Whether it be becoming a doctor, lawyer, or a teacher. Each of these jobs helps society in a different way. Social Studies teacher and Assistant Baseball Coach, Michael Smith, dreamt of becoming a teacher so he could influence the lives of his future students.

“As a 9th grader way back in 2004, all I’ve ever wanted to do was teach and coach. I saw the difference my teachers and coaches made when I was growing up and knew that’s the route I wanted to take. I can literally think of nothing else I’d rather do every day. History has always been my favorite subject. I enjoy getting to learn about major events that have happened and the lasting effects of them. While it might not all be pretty, there is still value in educating ourselves so that we can make better decisions,” said Smith.

A person’s energy says a lot about how people around them talk to and handle them. A good energy leads to happy and motivated people. Michael Smith fit that criteria. Math Teacher and Baseball coach, Matthew Allen, saw Smith as someone who could easily light up a room.

“I’ve known Michael Smith for 15 years; I actually coached him when he was a student at Mansfield High School. He is a highly energetic person and his high energy is often contagious, which is a plus when coaching teenagers. He’s very passionate at baseball and coaching teenagers. Smith wants to win games obviously, but developing his athletes is his first priority,” stated Allen.

For a lot of people, school can be stressful and it can be hard to get up and go to school. However, almost everyone has that one class they are able to look forward to. Senior, Collin Davis, enjoys being in Smith’s class a lot, especially because he’s so energetic.

“Coach Smith’s class is one of the classes that I can look forward to whenever I wake up, there’s never a dull moment in his class. Even though it’s his first year teaching, you would never know by the way he carries himself. He allows you to feel comfortable,” stated Davis.

With a lot on his plate, Smith has a lot to balance with coaching, teaching, and his daily life. Things can seemingly get stressful for him, given that he has so much to do. Smith feels like with all of his responsibilities, he doesn’t get to spend a lot of time with his family which makes him feel bad.

“It is is very challenging. Coaching often requires us to be at practice or games until late at night, on the weekends, and even during extended breaks, such as Thanksgiving, Christmas, and Spring break. As you can imagine, we miss out on a lot of family time and special memories. To make up for the times I’m away from my wife and daughter, it is imperative that I give them just as much attention and energy when I’m home as I do when I’m coaching,” stated Smith.

Coaching a sport has a lot of responsibilities like scheduling games and working hard to train their players. However, that is not what coaching is all about. As coaches, they are known to help their players become better as people, more than just players. Senior, JD Moreno, believes that Smith is not only a good coach, but a good person.

“I have been playing baseball since I was 3 and Coach Smith is probably one of the best coaches I’ve had. I look up to him because he understands the players and motivates them to be the best they can be. Not only as a baseball player, but as a young man. He is definitely close with his players, Coach Smith treats us like we’re his own kids,” said Moreno.

Since he was younger, Smith had dreamed of becoming a teacher in hopes of changing the lives of those around him. However, with his ambitious personality, some of the people around him expected him to take on something way bigger. Allen was shocked when he learned that Smith was returning to the district after graduating, he didn’t think he would become a coach.

“When I heard he was a history teacher and coach, I was definitely surprised. He played baseball at DBU and in the California Angels organization. I thought that he was going to be a politician or motivational speaker after high school,” said Allen.

As the days go on, to a lot of people, life may seem repetitive. As things become repetitive, it becomes boring and in need of something to make the day better. In moments like these, Smith tries to remind himself the good things he has to look forward to.

“I love the opportunity to interact with my students each day. Like many students feel, it can get monotonous and tiresome showing up every day. But when I remember the opportunity I have to engage with and impact my kids, it is absolutely worth all of the time and effort that goes into it,” stated Smith.

With the classes people look forward to comes the teacher- the reason why the class is enjoyable in the first place. Michael Smith has become the teacher that makes the class enjoyable for his students. Along with that, he has become someone they lean on to talk to about several things. Davis enjoys talking to Smith about a range of topics, given how comfortable he feels around him.

“Coach Smith is honestly one out of the handful of teachers that can actually sit down with you and give you good advice. He is constantly keeping up with his classes and that’s what I enjoy most about him,” stated Davis.

Michael Smith is someone a lot of people enjoy having around. Whether it be as a friend, teacher, or coach. He hopes to inspire those around him to be better and to feel better.