Back Stage at the ‘Putnam County Spelling Bee’ 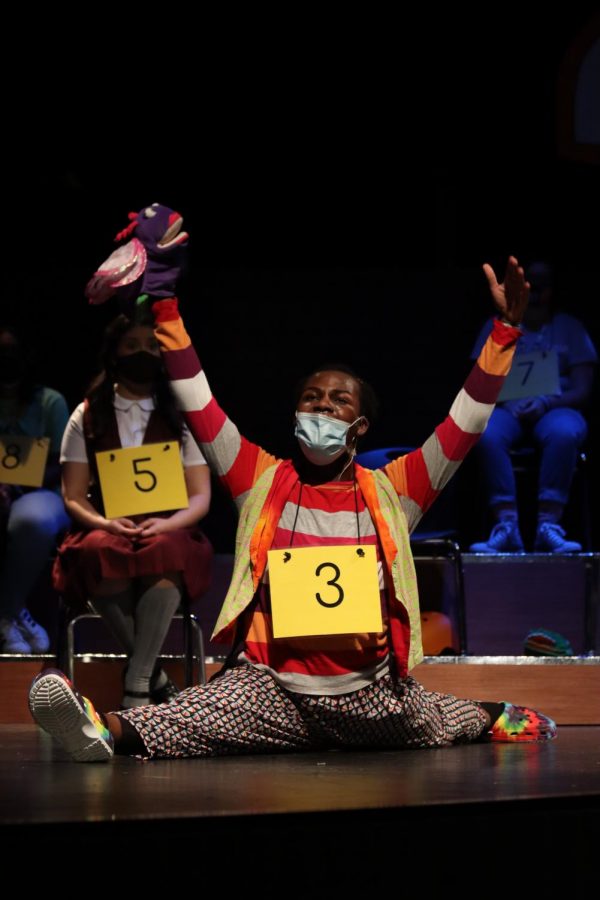 The Lake Ridge Theatre Department will have some unique cast members as part of their latest production.

With Covid-19 taking control over the school year, the theatre department had been concerned with whether or not they’d be able to have a performance. However, despite the odds, they decided on the play, The 25th Annual Putnam County Spelling Bee.

Due to Covid-19, the theatre department has faced several hardships in regards to the students involved in the class. With people being in and out of quarantine, putting a performance together was becoming more and more difficult for the department as a whole. Junior, Emily Hamm, feels like with Covid-19, it was hard to take any performances seriously.

“There was a period in time when we didn’t really take the show seriously just because every other high school had to cancel their shows due to people being in and out of quarantine. However, when we realized this show will be put on, everyone put their all into each rehearsal to prepare for this weekend,” stated Hamm.

With the play being in a closed off area, Covid safety precautions are expected to be taken seriously. Especially since there are people who are looking forward to seeing the performance. Assistant theatre director, Jill Baker, has the set-up planned out and intends to prioritize everyone’s safety.

“We will only be seating every other row with two empty seats between each party, so that is limiting capacity to about 150 seats per performance. We will be taking temperatures at the door and an usher will escort each group to their seats to ensure that they are properly spaced. All patrons are required to wear face masks at all times during the performance. The PAC will be sanitized after each show. We are running with the bare minimum of cast & crew members to allow for plenty of distancing on and back stage as well,” stated Baker.

The department has put a lot of effort into their performance, with cast members going in and out of quarantine. Despite the odds, a lot of them seem quite proud of this performance and know it will be a success. According to sophomore, Hannah Albin, they have put a lot of energy into their rehearsals.

“We’ve spent almost every single class period since the middle of November working on the show and we have had after-school rehearsals since the beginning of January. We are all very excited for everyone to see our show, we’ve worked very hard to get the show to where it is now,” stated Albin.

On the other hand, being together for long periods of time makes it hard to social distance in most cases. People like to touch and be close, and without that, it feels alien to a lot of people. Baker felt like since they have begun rehearsals, it was a small struggle to keep up with the Covid guidelines, but they did well.

“We’ve had students in & out of quarantine since probably November, so that was interesting. Other than that, we have been following COVID guidelines regarding distancing & sanitation. We’ve had to really pare down the staging to maintain safe distances. The hardest part is keeping them away from each other because they’re all friends,”

Many people at Lake Ridge have gone to the performances done by the theatre department and are rarely disappointed. However, this year a lot of people are going to watch them perform for the first time. Junior, Savannah WIlliams, is going to watch the play and is looking forward to it.

“I plan on going this weekend and I am excited to watch them perform. It’s my first time watching a performance at Lake Ridge, I hope it’ll be really good,” said Williams.

This year has been quite difficult for the theatre department due to all the issues from Covid-19. They have done their best to beat the odds and now are performing a play they put so much effort in.