Students vs the Snow 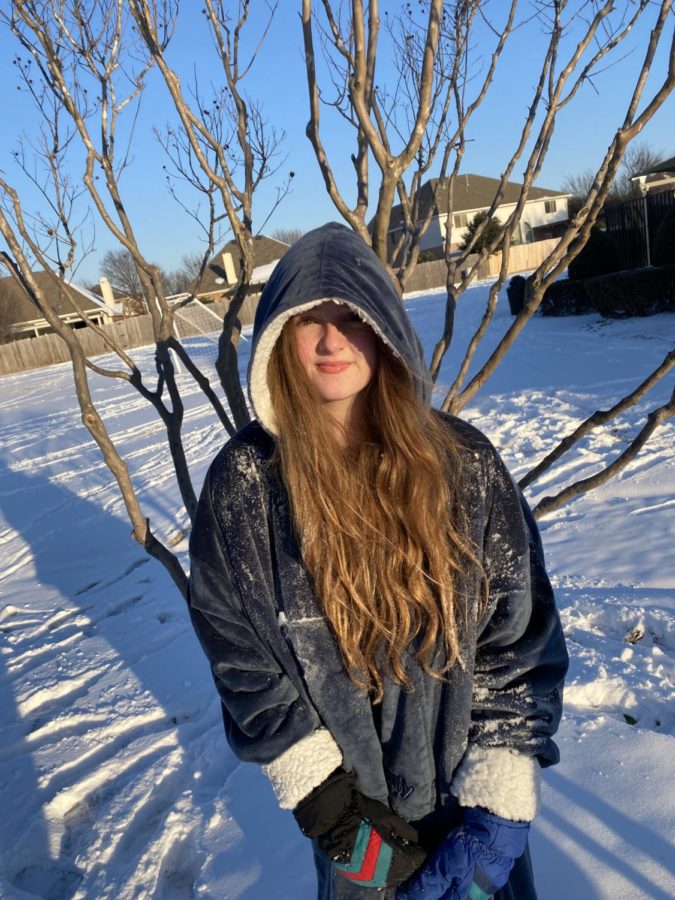 Sarah Cole, senior, suffered burst pipes and loss of power throughout the forced-break.

One would assume that the lowest temperatures in 40 years would bring people joy, especially in Texas. However, as snow was piling up outside, many families all over the state were losing power and gas, worried if they would be able to keep warm in the sudden harsh temperatures.

Texas is known for its odd weather, some days hot while other days cold. Since it’s the south, it’s more known for being warm and summer-like, so buildings and houses would be built according to the climate of the area. Senior, Angelique Mauldin, had her pipes freeze due to the shock of freezing temperatures.

“We lost power and it got so cold that our heater broke and our pipes froze, so we had to go to my grandma’s house for a few hours. We didn’t have hot water for a whole week as well, and honestly Southern states don’t have the infrastructure to handle cold temperatures, which is what made it even worse,” stated Mauldin.

Not only were the houses unprepared to face the weather, but so were people who had barely seen snow. The snow froze up the roads and made it difficult for people to get anywhere safely. Senior, Sarah Cole, believes that it’s not surprising that people weren’t prepared for this to happen.

“It hardly ever gets even below 32 degrees here. I don’t think anyone was expecting this to ever happen. People don’t learn how to drive on ice, or deal with snow-caused power outages because they’ve never had to. Not just that, but our houses weren’t meant to handle it either. Everything that happened was a complete shock,” stated Cole.

There were people who didn’t lose power or gas, and those people became great help for those who had neither. A lot of people would go to close friends and relatives that were lucky enough to have either in hopes of keeping warm and comfortable. Junior, Daniel Akinola, went over to his friends house while his parents remained at the house to make sure everything in the house was fine.

“We stayed at our friends house the majority of it because the house became too cold and our electronics were near dead. The craziest part was that our house got so cold it was in the 50s and we didn’t have a working fireplace. My parents ended up using the stove to keep warm while my brothers and I were away,” stated Akinola.

With a lot of people not used to the cold weather, especially younger kids, quite a few people who have had small glimpses of the type of climate were worried about those at risk. People who live in Texas are used to the hot weather, so being met with the historic weather event was worrisome. Junior, Timi Adewale, was worried about his younger sister.

“I was mostly worried about my 2 year old sister who wasn’t used to the extreme cold weather. The fact that it was dark most of the time made it even scarier, especially since she’s small and could easily get lost,” stated Adewale.

“At the moment, it was pretty frustrating because I have bad circulation, so my hands and feet go numb easily in colder temperatures. In hindsight, it could have been a lot worse. At least we had food and a functional fireplace and wood to burn. I honestly feel better knowing that I learned ways to handle being in the snow like that,” stated Mauldin.

Due to the structure of Texas homes, many people had pipes burst and fires break out due to the furnaces exploding. Many families are calling plumbers and carpet installers, but since it occurred to so many people, it’s at an all time high demand. Cole thought her house was fine until her and her family discovered an issue in one of the rooms of her house.

“The hallway near our entrance and the dining room, which is near the entrance, were the only rooms not affected at all, so when we first walked in, we didn’t even notice. Then once we got past the dining room and entered the living room, we saw the water covering the whole floor. We all started freaking out and trying to find the source, but no visible pipes had broken. My dad turned off the water to the whole house since we couldn’t tell where it was coming from, and we started cleaning immediately. We picked up everything on the floor to try and stop them from being more ruined, then we started vacuuming up the water on the hard floor. The carpeted areas were the worst, not only were they fully soaked through, but there was about an inch of water on top of the carpet,” stated Cole.

The first snow day that week excited almost everyone, especially since they didn’t know what would come next. There were kids sledding and building snowmen, happy to get a day off to enjoy the snow. Junior, Jada Torez, liked seeing the snow given how rare it is.

“When it started snowing, I was happy at first. However, as it continued to snow, I got tired of staying home since it was cold. I wanted to be able to go out and have fun,” stated Torez.

Snow is a rare sight in Texas which left a lot of people wondering how it even happened in the first place. Despite that, many people were gratefully affected due to how unprepared Texas was to meet this harsh weather. Many people are going to have to do a lot to bring their homes back to normal from all the damage.