Teacher by Day, Sponsor by Afternoon 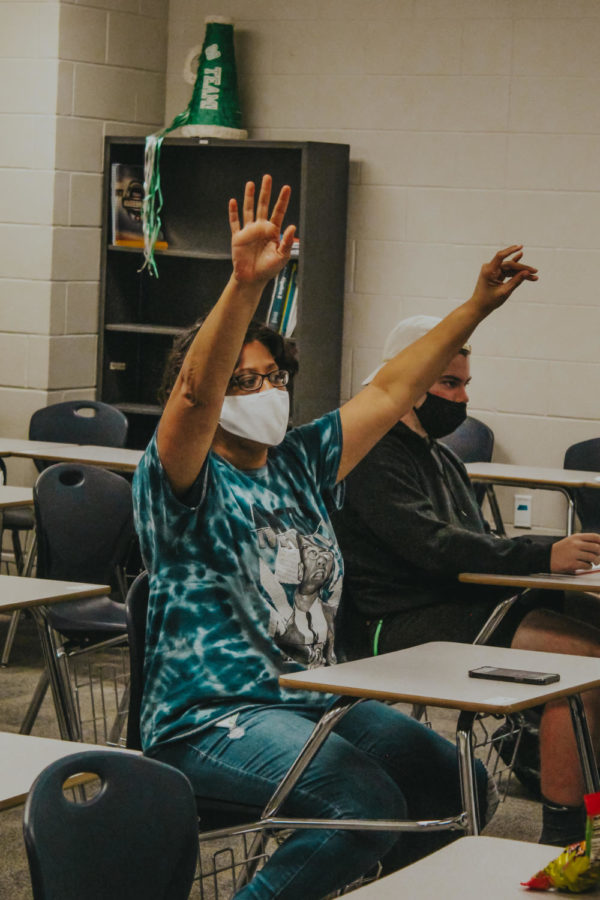 This year more than ever clubs have been a way to keep students connected in a fun and safe way. With the added stress this year that has been put on both teachers and students, the teachers who made the choice to sponsor a club have chosen to put even more on their plates in order to allow students at Lake Ridge to enjoy their passions and find new hobbies within the school environment. With more than 40 clubs being offered at Lake Ridge many students are able to participate in activities they wouldn’t have otherwise been able to enjoy.

Teachers who sponsor clubs have to balance both the class they teach and the clubs they sponsor. This can add stress to an already stressful school year and make it difficult for teachers to find the perfect balance between their class and clubs to make sure both are getting an appropriate amount of attention. This can make it even harder to find the right way to divide their time between multiple classes and the clubs they sponsor. However, according to bowling club sponsor, Donna Davis, once that balance is found it can have a rewarding impact on the sponsor.

“I have 5 different classes to prep for and that takes a LOT of time. Luckily the Bowling Team does not require a lot of planning on my part except for every third year when we have to travel to Regionals in Amarillo. We did go to the State Competition this year so that took a little bit of planning and coordination with the coach. However in the end, I think the Bowling Team is different from every other group on campus because we have such a wide variety of students who would probably never get together otherwise or probably even know each other.  We have had athletes from football, baseball, soccer, golf, tennis, cheer, drill team, band, and students who are not involved in anything else come together, get to know one another, and form strong bonds to become a team.  The great thing about the bowling Team is that students can participate while doing another sport as well,” Davis said.

As the bowling club sponsor, Davis had unique issues that she has to deal with that have an affect on the bowling teams success.

“I would say the hardest part about sponsoring the bowling club is earning money and recruiting.  Since we are not a UIL sport, but follow UIL rules, we do not get any funding from the district and have to raise our own money for traveling out of town. It is very expensive to get to Amarillo and pay for meals and hotel rooms for 12-14 students. We also have to raise awareness of the team so that we have enough students on both the Boys and Girls Varsity teams to compete which can be difficult,” Davis said.

Teachers usually have different strategies when it comes to splitting their time between the clubs they manage and the classes they teach. Some teachers decide to let the students in the club take leadership roles and have full control of the club, while others decide to stay in control of the club themselves. Heather Thompson, who is a sponsor for the minorities in STEM club, finds it most effective to let the students be in charge of the club as well as sponsor a club that relates to the class she teaches.

“The club doesn’t really add much stress to me. The students who run the club do most of the work and are great at getting things done. The best part about sponsoring the minorities in STEM club is providing opportunities for students to grow in their interests outside of regular classes,” Thompson stated.

Some teachers are able to sponsor clubs that work around their class schedule so that they won’t have as much on their plate throughout the school year. This allows for them to easily divide their attention between both their classes and clubs. Youth and Government sponsor, Ashley Hicks, feels as though sponsoring a club that fits her schedule lifts a weight off her shoulders.

“My Youth and Government club is really only active during the Fall semester, which is perfect for me since my AP class gets super busy during the spring semester, preparing for the AP Exam. However the time commitment can be tough. We have a couple of Saturday meets that are all day events and then if we make it to state, we are gone for three to four days. I do have a really great leadership team in the club and the weekly meetings are run by them, very little work on my end. All in all sponsoring the Youth and Government club is so very worth it. I can not tell you how amazing it is to see students make excellent debate points for proposals/bills and really get into the political process. Students have often brought up counter arguments that I have never thought of,” Hicks said.

All in all, while sponsoring a club can take a lot of time and effort, many who decide to sponsor one see the students who participate in and enjoy the club as a benefit that makes it all worth it.