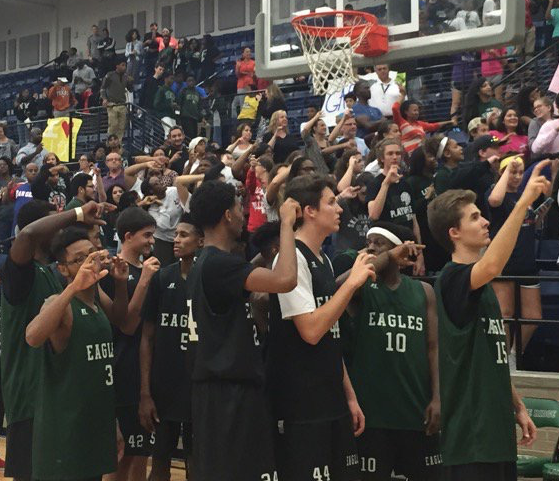 Basketball players from the 2015 squad on hand at the Basketball Madness celebration in the Eagle gym, Nov. 4, 2015.

With basketball season right around the corner, we can only be excited to see what the Mansfield Lake Ridge Eagles have in store for the 2015-16 season. After finishing with a 24-8 record and a first round playoff exit last season, the eagles look to make a major leap in order to reach their number one goal, a state championship.

The 2015-16 Eagles have a whole new look this season after losing four consistent starters due to graduation. “This team is young and experienced,” said head Coach Donte Wilson “We have players who didn’t play a whole lot last season that we’ll be looking to play significant minutes this season.”

Lake Ridge has been a consistent top team in the district for a few years now. Dubbed the little SEC in football, Head basketball Coach Wilson said the competitiveness in hoops equals that of the district leading football team.

“Our district in basketball is just as competitive,” he said “With schools like Lancaster (defending champs), Summit, who we’ve only beat once in four years, and Seguin, the district has some tough competition.”

As far as his expectations for his team Coach Wilson said, “The only thing we expect from our guys is that they show up with a good attitude, give their best effort, be really good teammates, and to be grateful.”