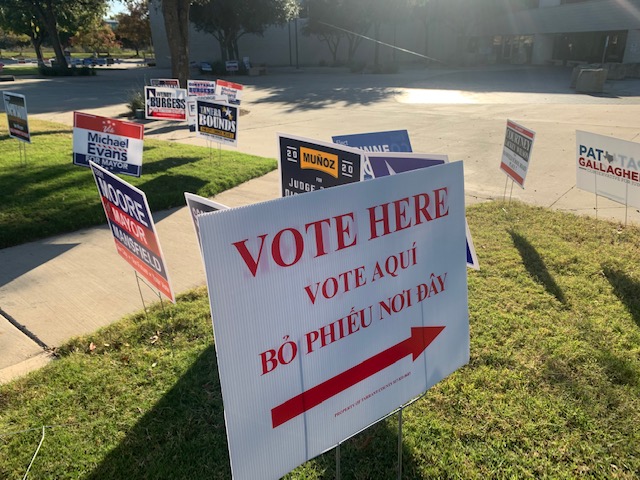 Voters will soon turn to the polls to elect a president.

Since the beginning of the election season, candidates, Joe Biden and Donald Trump have shifted the political climate. Supporters have found themselves in a tough position when discussing their beliefs with the other side. Political conversations have been a taboo topic over the years, but in 2020 the election has continued to grow hostile.

Many factors have impacted the county creating a divide. Positions on things such as Black Lives Matter, the #METOO movement, and immigration in America have made the race more than about a candidate’s policies. Each side has seen themselves defending their position rather than having an open conversation. George Olsen has experienced the fallout of a friendship due to their different political stances.

“I have two friends, that have found my ‘liberal views’ so alarming to them, that they have ended our friendship. Not on my accord, but because I have an opposing viewpoint. Usually, about the Second Amendment rights, women’s rights, and also Black Lives Matter. It just seems that there are very strong viewpoints on both sides. And my judgmental self says one of them is really very ignorant,” said Olsen.

Throughout the election, the line between morals and opinion has been blurred. For Senior Ernesto Molina, morals are not a disagreeable position. There seems to be a set idea of what things should be agreed upon across the board.

“I feel like with morals there’s only one right answer. And it’s that every life should be valued. It’s ethics and just what should be right and what should not be absolutely right,” said Molina.

Between Republicans, Democrats, and third-party voters, the parties have created clear divisions. Each party has a setlist of beliefs when it comes to health care, gun rights, and overall American life that each person can align with. Relationships in the workplace and in personal lives have ended due to conflicting opinions. Senior, Keshawn Rose believes it is the fault of the people who’ve created a hostile environment.

“There’s so much division in our country. I think people should keep their opinions to themselves if they have a ‘me versus them’ attitude towards politics. The candidates play a role in it, but people have free will. I think we treat each other like we’re just profiles on a screen instead of a human being. Calling people trash and bashing them for political beliefs is crazy. You can have an opposing opinion and still be respectful towards other people,” Rose said.

Throughout the year, Olsen has strengthened his beliefs and how present they should be in his life. While Rose refuses to let disagreements come between relationships, Olsen sees it as understandable.

“I think that it’s necessary sometimes because until you can get that separation it can get pretty ugly, even with friends, because we hold our views very close to our hearts and the kind of views that we’re talking about really are consequential. We’re talking about equality and equitability. We all have our own constructs that we create. When you don’t let in the opposing viewpoints to consider, to me, that’s just ignorance by choice,” said Olsen.

These candidates talk over each other during debates, shift the blame, and call names creating an aggressive environment. As the election gets closer, there is no escape from political campaigns. Campaigning has moved away from the positives of a certain candidate to every failure each candidate has caused. Late night shows, such as Saturday Night Live, have streamed videos comparing Trump supporters to white supremacist groups. While Trump releases campaign ads calling Biden a zombie or “Sleepy Joe”. Both sides have painted a destructive picture of each other creating more tension. Social Studies teacher, Ashley Hicks, has seen the impact of bias coverage shift people’s political beliefs.

When standing in front of 73.2 million people, according to NielsenIQ, how the candidates speak and treat each other play a large role in how their supporters treat each other. The candidates are responsible for modeling the behavior that they want to see throughout the election.

“Donald or Biden, they have such an influence on their followers, and what they say to them is so important. It’s a one-way path for them they’re not going to consider any other side because that’s how influenced they are. I think they need to answer the questions with full integrity and honesty and not try to pin hate from one group to the other,” said Molina.

Standard professionalism is what people expect from those running for a large role within a nation. The supporters follow after their potential leaders, even in disrespectful manners. Countries all over the world are watching which, Ariel Law, Senior, believes gives the leaders a responsibility to remain civil.

“They’re the United States role models right now, they are the face of the USA so it’s really important that they reach our people and they’re respectful of one another, they represent the United States as a whole. Whatever tone they set for the future is what we’re going to have to deal with,” Law said.

Every person plays a part in changing the hostile environment. Whether it comes from support or opposition, how people choose to lead the conversation impacts more than themselves.

“I would like very much to blame the candidate, but the candidate is just a symbol. I think it is the lack of motivation to really learn to push our minds into uncomfortable places. Too many of us try to enforce opinions on other people And that’s when we get into problems. When the leadership quits, trying to divide us, and the leadership tries to bring us together, again, to be a united people, then those conversations can take place,” said Olsen.

In his four years as president, Trump has faced constant waves of criticism. From the events of his past to his actions as president, voters have made their decision early on. With more than 90 million early voters, according to the U.S. Election Project, Law is already seeing more voters wanting change.

“It has come to such a bad place with the president being in the position that he is in. People are starting to realize that they need to do something. I definitely see a big curve of people going to vote now, versus the last election because they believed that their vote didn’t really matter. Things really happen when people don’t say anything and they sit by. Being silent just isn’t enough,” said Law.

With easy access to news, all ages have their eyes on the leaders of our nation. Rapid news is constantly spreading which leaves space for misinformation and criticism. In an attempt to educate the masses, Instagram accounts have begun to create and share information on large platforms. Twitter and Facebook have played a factor in sharing unfactual media. There is no way to eliminate bias when scrolling through your timeline. Learning throughout the election cycle has given Rose the chance to do his own research to avoid misinformation.

“My biggest takeaway is to question everything. Don’t believe something because it has a cute infographic or it’s coming from someone who has a platform,” Rose said.

Throughout the 58 elections held, hostility has been present, writers analyze how it affects the people. Ashley Hicks began reading a book written by two psychologists which took a look at why conversations have become intolerable. Hicks could easily see the events take place in her life.

“The premise of the book is ‘how did we get to a point where we view anyone with opposing ideas to us as threatening?’ ‘Why is that so threatening to us?’  It was interesting to me because I do see that some people are even afraid to have a conversation because they’re afraid that they’re going to offend someone and then it’s like a personal attack,” said Hicks.

Hicks believes her generation plays a part when they close themselves off to new ideas and hard conversations.

“The idea is that it’s just slowly happened over time. It kind of started with my generation, always being protected and shielded from some things and never having to be forced to solve a problem on your own. We’ve gotten to this point where the opposing side is seen as evil,” said Hicks.

Without the willingness to create change, people will have to continue to have hard conversations with each other. Each and every American plays a part in creating an accepting community. Olsen sees the unique situation as an opening for a larger change to create unity.

Everybody’s entitled to their opinion and entitled to their vote regardless of whether they agree with me or not. That’s the beauty of our system. We all have an equal place, an equal vote, and an equal voice. Along the way, times change, everything changes, and we’ve got to grow together.