Chemistry on the Court 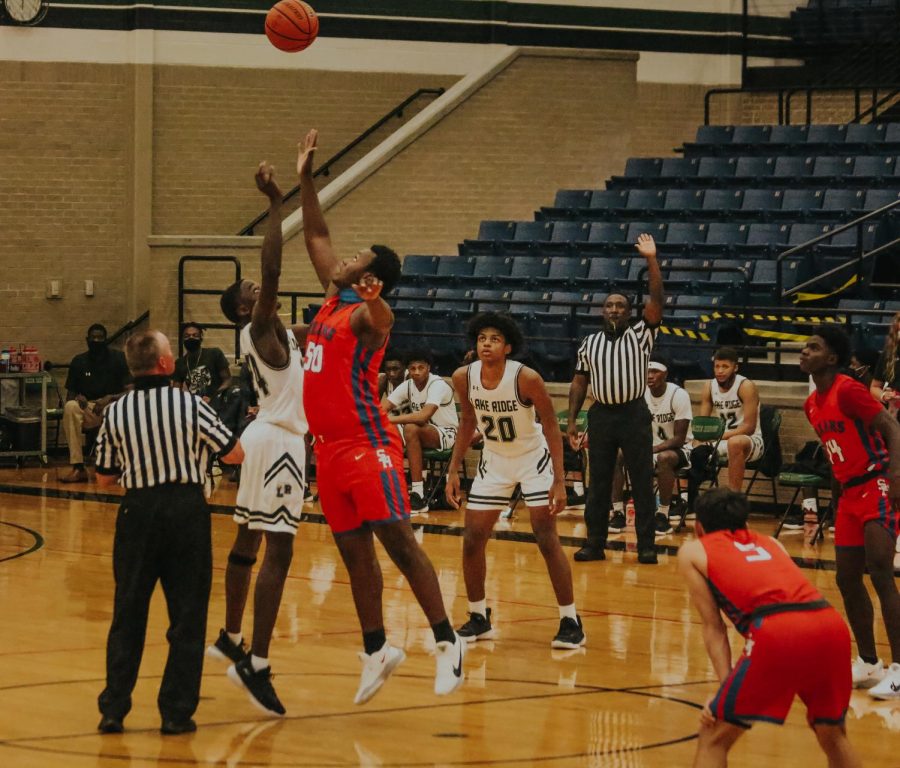 The Lake Ridge Boys Basketball team has rallied together with the help of strong leadership on and off the court.

The Lake Ridge boys basketball team has set forth for yet another season of competitive basketball while playing in one of the most difficult districts in the state. This year the team has many new faces as well as new challenges. While focusing on bettering their game on the court, the team has particularly focused on building chemistry as a team this year. This season, these athletes plan to go as far as they can with the help of their seniors, who plan to take on the role of leadership.

Teacher and head boys basketball coach, Donte Wilson, is prepared to aid each player in becoming the best version of themselves as an athlete. Wilson has high expectations for his seniors and hopes for them to lead the team into the playoffs. He has observed the leadership skills of the seniors throughout the season.

“They have taken ownership of the culture of our program.​ I think the biggest accomplishment is “buy-in” from everyone in the program and we have a group of players who believe in what we are doing. It is important for teams of any kind, to work toward and maintain connectivity. We must be on the same page the entire season to accomplish the goals set for this season,” said Wilson.

It is key to the success of any team to find chemistry to work well with their peers. Aaron Sharp, senior, enjoys seeing himself and his teammates building a sense of camaraderie throughout the season. He plans to assist in making the bond between him and his teammates stronger as the season progresses.

“An accomplishment is how close we have gotten as a team and a family, but there will be a lot more by the end of the season. Also, I like how we have gelled together through all the ups and downs of this season. People quarantined and hurt,” says Sharp.

Many don’t fully understand how difficult it is to come back from an injury, let alone an ACL injury, which can take an extremely long amount of time to recover from. Tyler Savage, senior, prides himself in recovering from this injury in a shorter time than expected with the help of hard work and his physical therapists.

“An individual accomplishment that I’m proud of is me coming back from a serious ACL injury. That is a 1-year recovery to being able to come back in 7 months. It might not seem like that big of an accomplishment but knowing what I had to do makes me feel like it was. Even though I believe that I could’ve made my leg stronger I still think me and my physical therapists did a pretty good job,” said Savage.

Senior, Aaron Sharp feels prepared to take on this role of leadership, while also bettering himself. He has found that things are going smoother for him due to his experience over the years. Sharp prides himself on being able to stay calm on the court.

“ I display leadership with actions, and also I try to make sure my teammates are encouraged and don’t feel defeated. A goal I have for myself is for my assists per game to go up and for my turnovers per game to drop, and an accomplishment I am most proud of is how comfortable and poised I play under pressure now,” said Sharp.

The Eagles still have a lot of room for growth this season,  and they plan to take their skills far into the playoffs and potentially to state. Senior, Tyler Savage, wants to finish this season off with a bang, knowing that this is the last year of competition in high school.

“For my senior season in high school, I am hoping to at least say that we’re able to make it to the playoffs which is a huge achievement, especially in our district. I know that we put in a lot of work though and we deserve a spot in the playoffs. More importantly, I want to see us play our best basketball that we have ever played even if that gives us a loss because I like to see us grow and know that we all did everything we could and we all did our roles as a team,” said Savage.

The basketball team will be continuing to put in the work to be successful on the court with the help of their seniors. The Eagles will take on DeSoto on Saturday the 16th in their next district game.