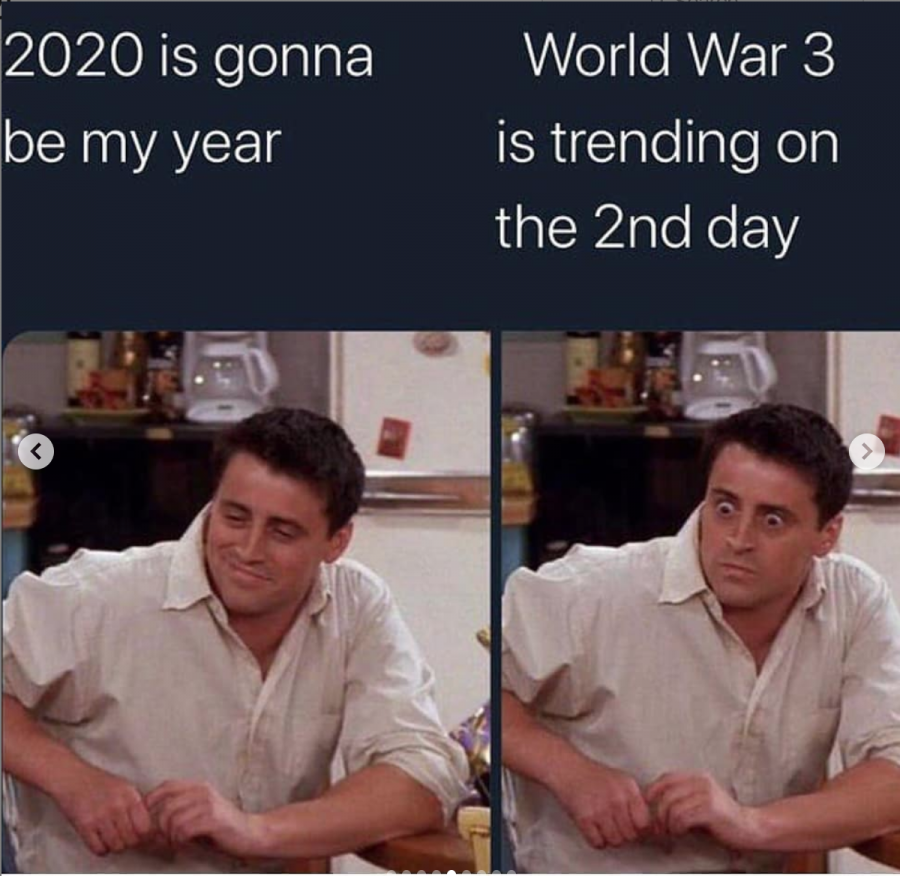 News article after news article about the United States of America and their killing of Iran’s leader. Many issues have blown up after Soleimanis death, rumors of a war being told. As those articles come out, social media has begun its turns. Memes blowing up the internet and jokes about the news articles. One topic that has been trending for almost a week was the subject over World War 3.

In the past, there had been wars that broke out that had quite the negative influence on the US. Wars like the first two World Wars, the Korean War and the Vietnam War. Geometry teacher, Karl Edwards had been around and enlisted during the Vietnam War. He believes that even if another war were to break out, he’d be the first to register.

“This one joke popped up on my computer that said anybody who feels that we should invade a foreign country are automatically registered for the draft. To be honest, I’ll gladly do it. I took an oath forty years ago and it won’t ever expire. I have dedicated what I have to this country,” stated Edwards.

After the news began to bring up issues the US had with foreign countries like Iran, many people on social media began to make jokes about it. Before anyone knew it, World War 3 had been trending for almost a week. Sophomore, Michael Mcgovern, believes that nothing major will come up from these jokes.

“I think that the memes are funny, but they aren’t at all accurate. Even though the situations have been getting more concerning, I don’t think there will be a World War 3 only because the issues with foreign countries have been going on for years,” stated Mcgovern.

Year by year, more graduating high school students enlist in the military. With this talk of a war, some of them began to feel anxious because this is something new to them. Senior, Miranda Noel found the memes quite rude to those who enlisted and those who have been enlisted.

“As someone who is already enlisted in the military, I found the jokes insensitive and not funny at all. There are some that were funny, but there had been a few that had been tremendously offensive. What people don’t seem to get is that this is actually a serious subject and it could lead to a lot of loss,” stated Noel.

After a lot of people talked about their opinions World War 3, there had been an increase in the discussion over the draft. There are people who are excited and are waiting to get drafted while others don’t want to get involved. Sophomore, Adam Hewitt, believes that even if a draft were to come around, he’d know his boundary.

“At first, I thought the jokes were funny. I started taking it seriously when I saw that people were actually being deployed to Iran, with that came the mention of the draft. Personally, I wouldn’t want to get drafted because I’m too young and too scared about what’ll happen. Even then, I think things have calmed down and those deployed will be back soon,” stated Hewitt.

Many students have been wondering if another World War will occur in the future. Lives are at stake and the future of this possible World War remains unclear and complex. If one were to happen, a lot of things will be lost, so the only thing people can do is be patient.