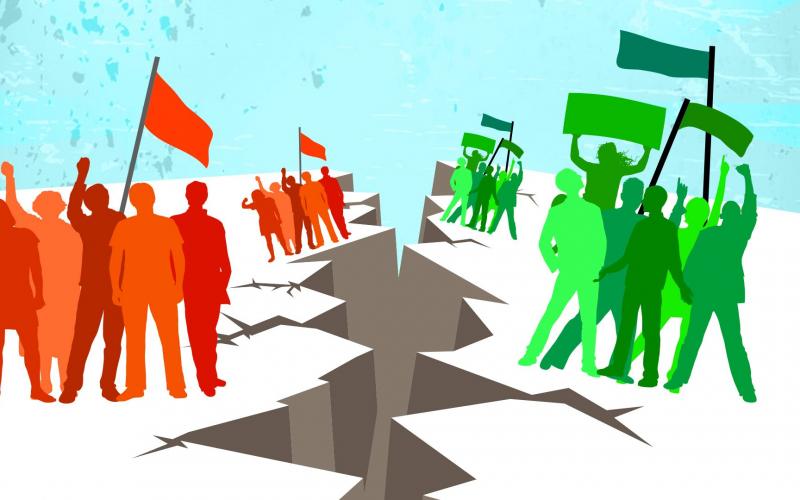 As the Election draws to a close, politics have created much division between people and relationships.

The 2020 Presidential Election became a very divisive topic of conversation in the U.S. There have been many points of debate, from the Coronavirus to social justice. However, expressing one’s political opinion can come with treacherous aftershocks. As the years have progressed, political opinions have caused drastic divisions between people and has even affected the relationships people have with their families and friends.

Generations differ in many aspects partially due to the time period in which they were raised. One of the most prominent contrasting aspects between older generations, such as the Baby Boomers, and newer generations, such as Generation Z, is their respective views on politics. Freshman, Mya Dorm, believes that people’s relationships are greatly affected by the way that they view things in a political format.

“This generation is very opinionated, and everyone is very strong willed and always wants to say ‘I like this and I don’t want to change that.’ I feel like a lot of disagreements could happen with everyone having such different opinions, and that could possibly ruin friendships, and even relationships between husband and wife, and boyfriend and girlfriend,” said Dorm.

Politics has always and will most likely continue to be a sensitive subject for those involved in the conversations. As a result, freshman, Adeline Keith, has watched as others are hurt by the beliefs of others, and has caused her to pull away from the conversations, even if it is all anyone talks about.

“The fact that everyone feels discriminated against by others opinions is very sad. If a student has an opinion, they shouldn’t be shut down by the counterargument. I choose not to be a part of a conversation about politics because I don’t want to see others offend or be offended by a belief,” said Keith.

People can use their voice to try to find out things about others. Social Studies teacher, Rena Long, believes that people have the ability to assume things of others without having a lot of background knowledge.

“It seems like people are always trying to figure out what your views are, so even when you try not to share your views, people always seem to get out of you and push you to say it even when you don’t want to,” said Long.

The results of the election will further divide an already divided the nation. Keith believes that our country’s infrastructure will be destroyed eventually because of how divided the United States is.

“In theory, we were about to split the nation because people are stupid. There is no real end to division. It just continues. As time goes on, and as our country’s opinions continue to shift into different worlds, there is no way that people will be able to stop hurting each other because of their gender, race, religion, and political affiliation,¨ said Keith.

Careers could be put at risk when politics are discussed. AP U.S. History teacher, Leigh Smith, feels that it is important to not discuss politics in school because it can have a greater impact on the adults.

“If a student wants to have a conversation with me about that subject, I know my job depends on me not saying anything. I can talk about politics and say what I know, but I can’t tell my viewpoint because the school has asked us not to, because people could get offended. If it is another teacher, and they are my friend, then I will discuss it, because I can trust that they will respect me, but if it’s in a situation that I am in with another student, then I try to back away if I can.”

There are many risks with discussing politics, but that shouldn’t stop Americans from forming opinions that could help them see the world in a new light, even if there is pushback from others who think differently.