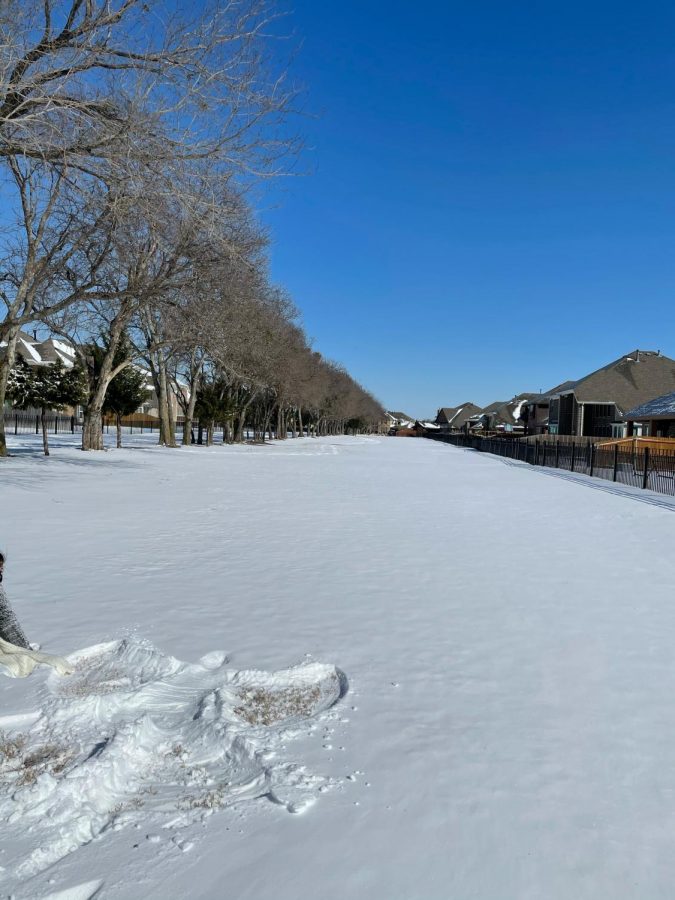 February's winter storm has caused many to worry about the affects of climate change.

5,000 years from today, the world map recognized by many individuals might have to undergo replacement by a different work of cartography. A majority of the seven continents may relievingly retain their titles, but the icy swaths covering Antarctica, as some scientists speculate, could seemingly disappear. This would be no trick of the eye, for the processes of climate change, according to scientists and weather professionals, would be the culprit. Chloe Roberts, senior, expands on the irreplaceable composition of the planet in relation to this global alteration.

“This is our Earth. Not only do we have to live here for the entirety of our lives, but our kids, grandchildren, and so on must have a safe place to live as well. Instead of being heavily debated, climate change needs to be talked about in a more open conversation that advocates for the environmental education of all people. It is not too late to save our home, but there will come a point when our window of opportunity locks forever,” said Roberts.

Classified as an emergency by approximately one-third of the world’s countries, climate change has secured a position on the agendas of scientists and politicians alike. This prioritized phenomenon is defined as encompassing both expansive weather shifts and temperature rises across the globe. Climate change did not attract such concern until the eighteenth century, though, when society was engulfed by the prospects of mechanization. According to Marie Lamkin, Environmental Sciences teacher, the utilization of certain substances beginning 300 years ago catalyzed the process.

“Climate change is the result of increasing amounts of greenhouse gasses releasing into the atmosphere. The molecules forming these gasses are carbon dioxide, nitrous oxide, and methane, which act like a blanket around the Earth that traps extra heat. Since the Industrial Revolution, we have a greater use for burning fossil fuels that project chemicals into the atmosphere,” stated Lamkin. 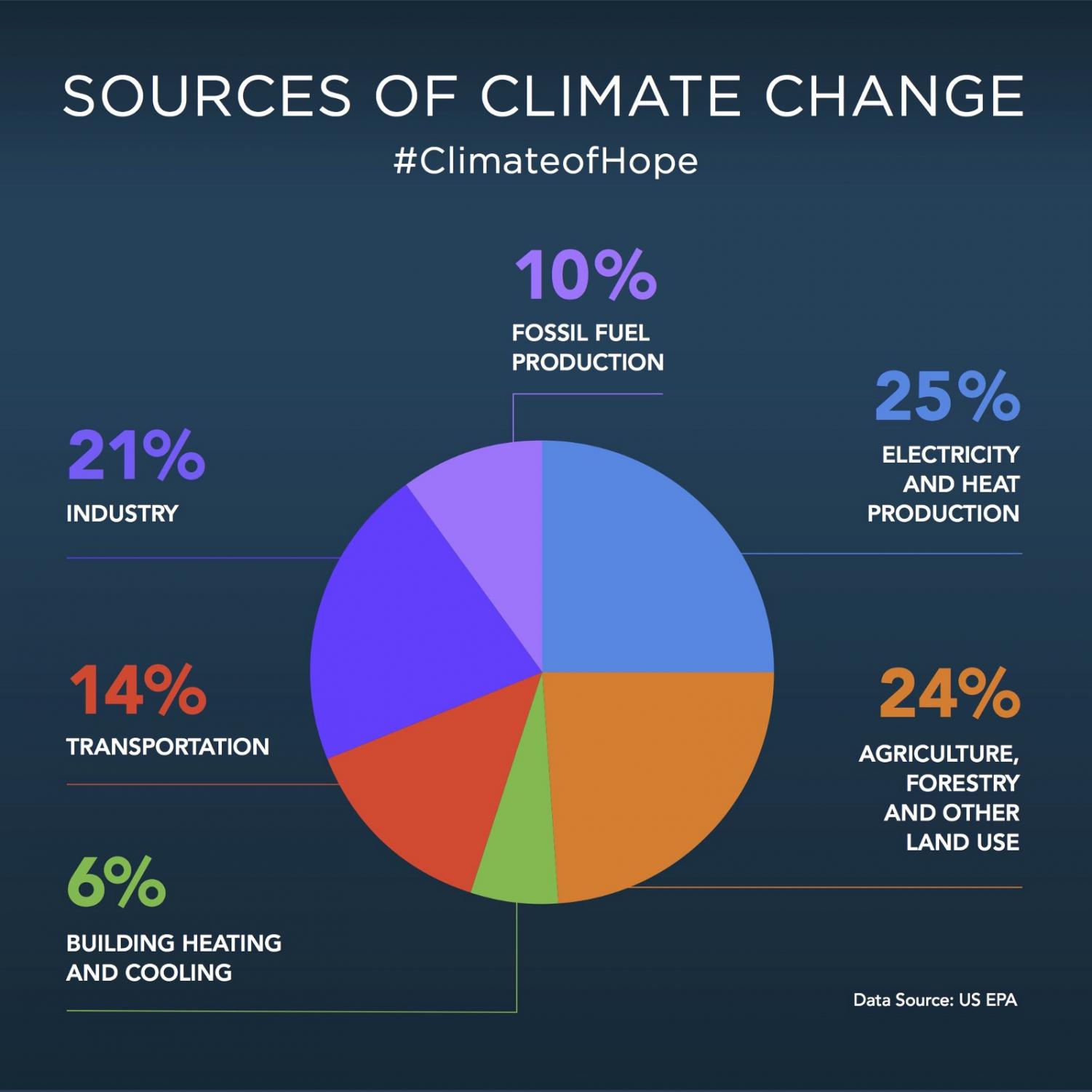 In response to this hazard invisible to the naked eye, energy companies located throughout the United States, including Project Vesta, Charm Industrial, and Global Thermostat, are pursuing initiatives geared towards reducing greenhouse gas emissions. One primary strategy being observed is the installation of control devices within factories that are proposed to confine harmful pollutants. This approach unfortunately does not come without the burdening price tag entailing billions of dollars annually per economic region. Michelle Mora-Gonzales, Senior Environmental Specialist, emphasizes the status upheld by non-renewable resources amidst the backdrop of innovation.

“I do not think it would be realistic to get rid of fossil fuel usage completely, but new technologies will be available in the future. Furthermore, we need to make sure our students and younger generations start studying greenhouse gas emissions and become interested in developing solutions,” said Mora-Gonzales.

The path climate change intends to traverse is not set in stone despite the earlier breakthroughs, and experts in the field continue to inquire on the clues set forth by previous events. One relatively new theory adjacent to the warming of the earth explores patterns of frigid air. As was recently endured by many Texans, spans of air recognized as “cold waves” by the American Meteorological Society are capable of descending from the Arctic Circle to regions near the equator. Vox writer Umair Irfan elaborates on the contrasting perceptions following this theory in his article Scientists are divided over whether climate change is fueling extreme cold events.

“How climate change will reshape winters is, as scientists like to say, an area of active research. There are a couple of competing ideas for how more warming will change the likelihood of extreme cold periods, like the frigid weather currently gripping much of the US. One group of researchers says that warming will make such events less likely, while another says that warming in the Arctic will increase the chances of frigid polar air spilling further south, leading to more periods of extreme cold in the near term,” stated Irfan.

From a political standpoint, the weather alterations swarming throughout the world are beckoning for the attention of elected officials. Supranational organizations, which are entities comprised of three or more states pursuing shared goals, have gained a particular significance when combatting this issue due to their spatial cover. The Arctic Council, for example, is conducting research regarding the quantities of black carbon being produced by polar oil operations under the supervision of their Arctic Monitoring and Assessment Programme (AMAP). Erin McGrath, freshman, identifies another multinational institution contributing to aiding global environmental differentiation.

“The UN is campaigning for waste reduction fulfillment as one of their twenty primary agendas. Since climate change is being highlighted at this large scale, I think it is now our responsibility to actually put action in the individual countries associated with supranational organizations,” said McGrath.

Climate change cannot be eliminated in its entirety, but there are many strategies individuals can adopt in respect to environmental consciousness. Studies recorded by the International Institute for Applied Systems Analysis are proving that annual greenhouse gas emissions can be severed by 20 percent when individuals abstain from driving to locations within walking-distance. People can also utilize reusable grocery bags instead of the plastic counterparts that are ultimately disregarded in landfills. According to Hannah Godbold, freshman, the application of such awareness will only prove fruitful when paired with daily consistency.

“Since we are in the middle of a pandemic, right now is the perfect time to truly initiate better treatment for our home. We do not have to wait until Earth Day to recognize the condition we have imposed upon the Earth because this truly is a global emergency. Our time is counting down until the effects of climate change will be painstakingly laborious to resolve, and that is both scary and bizarre to think about,” stated Godbold.