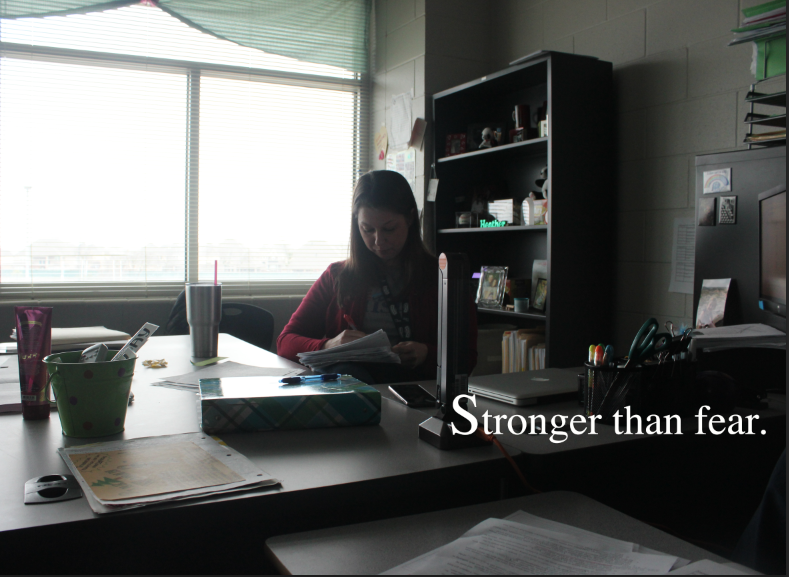 This is the first of a two-part series examining how two Lake Ridge teachers survived the trauma of being kidnapped as young children.

Bad things happen every day. Everywhere, every second, there’s some struggle to be had, some war to be fought whether internal or external. Though some of these horrible things exist in the past, their effects and the paths they create still exist in their victims, some of whom you see every day. Two of which you might know here at Lake Ridge.

Rewind to about 40 years ago. Visiting an aunt in Matamoros, a Mexican border town, Ivonne Want, Spanish teacher, was waiting to be granted entrance into the United States. Want was only 4 years old at the time and things went as normally as they do when you visit family. However, one night during their stay, trouble literally came knocking.

And I remember looking at my mom and my mom was just frozen like she couldn’t move.”

“I remember opening the door and looking up and seeing this big guy. He just went down, picked me up. And I remember looking at my mom and my mom was just frozen like she couldn’t move. And he took off towards the back of the house,” Want said.

The man only made it about two blocks carrying Want before he stopped. Whatever his plan was, he’d been forced to abandon it in a split-second decision.

“We walked about 2 blocks when there was a police car driving by. I don’t know if he thought my mom had called the police or what,” said Want.

Either way, the sight of the police made the perpetrator drop Want on the sidewalk and take off running in the opposite direction. To Want’s knowledge, the man was never brought to justice.

At that time in Mexico, young children were being kidnapped to either be forced to work in drug cartels or sold to families in the United States who could not have children of their own.

Years later, a few hours North in the state Want hoped to call home one day, Heather Willson, AP Psychology teacher, would be threatened by the same sort of terror in San Antonio, Texas.

“In the middle of the night I woke up and there was an adult at the end of my bed,” Willson said. “Yes we had an alarm system but it’s easy to cut them and that’s what he had done. He hadn’t gone through a door he had gone through a window.”

In the middle of the night I woke up and there was an adult at the end of my bed.”

After stealing her father’s truck, what followed was a 45-minute high speed chase between Willson’s attacker and, at one point, 13 police cruisers from 4 different departments.

“The high speed chase continued and I was glued to my door. He almost lost control of the truck several times, he hit several things. We almost rolled, almost flipped a couple times. He ended up crashing into another vehicle and taking off on foot after cutting me,” Willson said.

Willson was in court for three days. Prior to that she went through months of looking through police books in an effort to identify her attacker. In the end, what her 6-year-old eyes had believed to be an adult at the time actually turned out to be a 15-year-old boy on drugs.

“We went to court and I was able to identify him. The judge was a female and she was really angry that this teenager had hurt me. My parents were allowed to be in there during the sentencing and ask him why he had done this,” Willson said.

According to Willson, the teen’s response was “Dude I don’t know, I was on drugs. It didn’t even really happen for me, I don’t care.” Willson and her family never got the remorse they desired from the teen who inserted himself into their lives. Ultimately, the 15-year-old was tried as an adult and given 20 years at Huntsville Prison. Willson, on the other hand, was given a life sentence.

Willson still remembers what happened vividly, similar to Want. Want can still see the face of the “big bald headed man” and can still describe it in detail should she be asked. However, unlike Willson, her attacker was never caught.

After the incident, Want couldn’t be alone in public places. Little things that reminded her about the tragedy triggered her and she struggled to readapt to places she previously considered normal.

Even with my dad, if I saw a male adult I would start shaking. I would start freaking out like I thought they were going to take me”

“If I did not see my mother in the classroom with me or very least at the door, I would take off running, I would go home. Even with my dad, if I saw a male adult I would start shaking. I would start freaking out like I thought they were going to take me,” said Want.

Similarly, Willson rarely found herself alone after her own incident. Her parents worrying over what had happened and could still happen caused her to constantly be in the care of another person.

“From that point on I wasn’t allowed to be by myself. This guy who kidnapped me had a little brother at the same elementary school and I had to get a restraining order because he was threatening me in retaliation for sending his brother to jail,” Willson said. “At school I had to have an escort. I wasn’t allowed to leave the classroom. Before and after school I had to be with a teacher but the teachers weren’t consistent so I ended up having a principal who doubled as a personal babysitter. I was conditioned to always be around a person or people.”

Want too found herself in need of assistance at school. Having a brother only a year younger than her made it easy for someone close to her to step up and play a protective role in her life. Due to the relationship she had with her brother, he never left her side.

However, in the years after the incident Willson’s family continued to struggle financially and emotionally. Willson’s own mother, father, and brother each have had to deal with the residual effects of what happened to her. From feelings of jealousy and resentment to blame, Willson’s trauma did not just stop with her.

My mother always blamed me for everything that happened after that because there were financial difficulties.”

“My brother feels like he’s responsible for me even though he’s younger but he’s also mad because he feels like I got a lot of attention out of it and he’s resentful. He didn’t get help after the event like I did. My father’s happiest moment in life was when I got married because he felt like this child who had emasculated him was headed off to my husband. My mother always blamed me for everything that happened after that because there were financial difficulties,” Willson said.

The kidnapping sent Willson and her family down a path that ultimately resulted in poverty. Expenses ranged from medical to legal and resulted in hardships that lasted beyond the night of January 19, 1987.

“There was financial difficulties with repairing the truck and going to court. I had to go to the hospital the next day and I was in the hospital for 24 hours. We had to pay off a lot of things and we lost our house when I was in third grade from it,” Willson said. “It completely dismantled my family.”

Part 2 of ‘Stronger Than Fear’ will appear on March 29th.